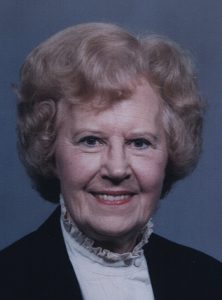 Alice E. Williams, age 93, died on August 29, 2011 at Lenbrook Continuing Care Retirement Community in Atlanta, Georgia. She lived a remarkable life.
Born on February 16, 1918 in Pittsburgh, PA, to Adolph and Emma Taufenbach, she moved to Cleveland, Ohio with her family as a young child. Alice graduated from Garfield Heights High School in suburban Cleveland during the throes of the Depression. There was no money for higher education, so she went to work immediately following graduation from high school. During World War II, Alice met and married Howard Williams of Willard, and they moved to Las Vegas, Nevada, where Howard was stationed as a pilot in the U.S. Army Air Corps. In 1945, Alice gave birth to her son, David H. Williams.
After the end of the war, the Williams family returned to Ohio and settled in Willard in 1948. Shortly thereafter, Alice went to work for the Pioneer Rubber Company. At a time when few women held managerial positions in industry, she worked her way up the corporate ladder and became head of industrial glove sales throughout the country and overseas. Her industry honored her in 1991 when the National Industrial Glove Distributors inducted her into its Hall of Fame. In 1994 Alice retired from the successor company to Pioneer Rubber Company after 43 years of a path-breaking, successful career. She loved every minute of her time at Pioneer and all of the people with whom she worked. Throughout her entire working career, Alice’s desire was to care for and educate her son, David, and to make Pioneer Rubber Company the best at what it did. She achieved both of these goals.
Alice’s interests were varied. She cared about Willard and its people. She was a member of the Trinity Lutheran Church during the entire time she lived in Willard. She devoured books and pursued learning all of her life, and she enjoyed music, travel and most of all, dancing.
There was a glass ceiling through which women of Alice’s day had trouble penetrating. There were a few exceptions to the rule. Alice was one of them. Praise God for a life well lived.
Alice is survived by her son, David H. Williams, and his wife, Kathleen G. Williams of Atlanta, GA; her grandchildren, David H. Williams, Jr. and Jonathan G. Williams, of Atlanta, GA; her two great-granddaughters, Mary Kathleen Williams and Emma Bennett Williams, of Atlanta; her sister, Edna Stewart of Cleveland, Ohio; and her nephews, Craig Stewart of Boston, MA, and Brian Stewart of Cleveland, Ohio, and their children.
The funeral service celebrating Alice’s life will be held at the Trinity Lutheran Church in Willard, Ohio on Saturday, September 3, 2011 at 11:00 AM with Reverend Roger Thompson officiating. Friends may visit with the family at the church from 10:00 AM until the service time. Burial will follow in the Trinity Lutheran Cemetery in Willard, Ohio. Memorial contributions can be made to the Willard Rotary Club’s Alice Williams Scholarship Fund which has been established in her name to help graduates of Willard High School with the costs of their higher education. Donations can be sent to Mr. James A. Smith, Treasurer, The Rotary Club of Willard Foundation, PO Box 503, Willard, Ohio 44890. Secor Funeral Home in Willard, Ohio assisted the family with arrangements. www.secorfuneralhomes.com

I just was told of your Mother’s passing, David. My Dad died in 2008 and my stepmother passed away this past year, so I generally don’t get much news from Willard any more. Your Mother was one of the kindest ladies I have ever known. You and your family are in my prayers.

I miss seeing and talking with your mom. I was her mailman and always would take her packages to her front door so I could chat with her. I enjoyed hearing all she did in her life. My prayers are with her family.

David and Family, Am so sorry to hear of your Mother’s passing. I worked with Alice for about 10 years at The Pioneer Rubber Co. and learned many things from her. We had many good times together. I always admired her for the strides she made during her career and for the elegant lady she was. I hadn’t seen Alice for several years but finally was able to visit with her in Willard in 2008 (can’t remember the actual date). It was a pleasure seeing her again and to see that she was still the elegant, beautiful Alice that I started working with in 1964!! My husband passed in December 2010 so I know this is a difficult time for you. My thoughts and prayers are with you! David, God Bless you and your family!

David and Family, so sorry to hear of your mother’s passing. She lived a long and wonderful life. My parents, Jack and Donna Terveen both passed away this past year, but what wonderful memories we have. Many times my parents would tell tales of the going ons at the Willard Flashes games. May God bless you and your family.

David and family, was sorry to hear of your Mother’s passing. She was a beautiful lady and loved her family.
She will be missed by all who knew her.
Your all in my prayers.
God bless and be with you at this sad time.

Alice was one of the classiest ladies I have ever known. I worked at Pioneer with her for many years, and had nothing but admiration for her. I remember listening to many of her stories, and sharing many a laugh with her, also. What a fine life she led. She was a fine example for women everywhere. Rest in peace, Alice. You have fought the good fight.
Cynthia Lewellen Branham
Summertown, Tennessee