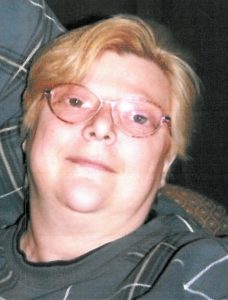 Betty J. (Lewis) Coder, age 48, resident of Willard, Ohio passed away unexpectedly on Sunday, December 20, 2009 at her home. She was born on June 15, 1961 in Galion, Ohio to Robert E. and Ruthela M. (Wright) Lewis and had been both a New Washington and Willard resident. She was a 1980 graduate of Buckeye Central High School and had worked at the former Village Inn in New Washington and Jerry’s Restaurant in Willard. She was a member of the St. Paul’s United Methodist Church in Galion.
She is survived by her husband, Robert L. Coder; her mother, Ruthela M. Miller of Galion; two sisters and brothers-in-law, Lena M. and Jeffrey W. Schroff of Galion; Roberta E. and Christopher S. Corwin of Fremont, IN; one brother and sister-in-law, Harold W. and Lori A. Lewis of Broadway, OH; mother-in-law and father-in-law, Sylvia and Lyndel Coder of Attica; brother-in-law and spouse, Tom and Sue Coder; sister-in-law and spouse, Barb and Ron Dentinger; along with numerous nieces and nephews.
She is preceded in death by her father, Robert E. Lewis and her grandparents.
Friends may call at the Secor Funeral Home in Willard, Ohio on Tuesday, December 22, 2009 from 2-4 and 6-8 PM. Funeral services will be held at the St. Paul’s United Methodist Church in Galion, Ohio on Wednesday at 11:00 AM with Reverend Tom Snode officiating. Burial will follow in Bethel Cemetery in Willard. Memorial expressions can be made to the St. Paul’s Church or to the donor’s choice. Online condolences can be made at www.secorfuneralhomes.com

Bob,Ruthella and family, I am so very sorry to learn of the loss of Betty. She was such a sweet, lovable person, she will be missed by many. My sincere sympathy. Betty Shell

So sorry to hear the news about my cousin. It is so unexpected and devasting when you hear someone so young to leave this world so abruptly, especially family members as sweet as Betty.
May God send His angels to take charge over you and comfort you at this difficult time.
Ken Scribner

Bob and family, I am so sorry to hear the loss of Betty. You have my deepest sympathy. Rick Hafner