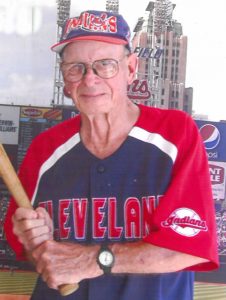 Charles E. Donnersbach, age 81, of New Washington, Ohio, passed away on Wednesday, October 19, 2016 at Mill Creek Nursing and Rehab Center. He was born on February 8, 1935 to the late Cyril E. Donnersbach and Mildred A. (Laipply) Donnersbach in Cranberry Township, Ohio. Charles graduated from New Washington High School and served in the U.S. Army. He was a huge Cleveland Indians Fan and had a passion for collecting including coins, John Deere tractors and guns. He enjoyed gardening, grilling, attending auctions and steam engine shows. Another favorite pastime was his grandchildren; his grandchildren were his world.
He is survived by 2 sons, Norbert (Dawn) Donnersbach of Horton, MI and Timothy (Melissa) Donnersbach of Galion; 4 daughters, Jacquelyn (Michael) Woogerd of Lexington; Andrea (Doug) DeNero of Galion; Sara Donnersbach (Daniele Costanzo) of Medina and Dana (Nathaniel) Reid of Toledo; step son, Jeff Kimmel of North Fort Meyers, FL; and 4 step-daughters, Rebecca (Thomas) Kehres of Port St. Lucie, FL; Cheryl Johnson of Powell; Lisa (Todd) Snyder of Shelby and Angela (Matthew) Songer of Crestline; 8 Grandchildren, Aaron Donnersbach, Sam DeNero, Ava Donnersbach, Mya Salas, Allison DeNero, Noah Salas, Savannah Donnersbach and Ethan Reid; 13 step-grandchildren, Joshua (Amber) Kehres, Aaron Kehres, Justin Johnson, Morgan Johnson, Kristina (Andrew) Howard, Matthew Snyder, Luke Snyder, Jacob Snyder, Megan Songer, Claire Songer, Brooklyn Songer, Kaitlyn Kimmel and Natalie Woogerd; 6 sisters, Rita (Carl) Hoffbauer of New Washington; Mary Silverman of Portland, IN; Ruth (Kenneth) Meinzer of Bucyrus; Bernice Donnersbach of Portland, IN; Loretta (Phillip) Schneider of Portland, IN and Esther (Ricky) Morgan of Portland, IN; a brother, Daniel Donnersbach of Byrne, IN and numerous nieces and nephews.
In addition to his parents, he is preceded in death by his wife, Twila (Hosey) Donnersbach; 5 brothers, Norbert, Michael, George, Arthur and Thomas Donnersbach; and a sister and brother-in-law, Doris and Frank Weaver.
Visitation will be at Secor Funeral Home in New Washington, OH on Sunday, October 23, 2016 from 5:00 until 8:00 P.M. A Funeral Mass will be Monday, October 24, 2016 at 11:00 A.M. at St. Bernard Catholic Church in New Washington with Fr. Eric Culler officiating. Burial will follow at the St. Bernard Catholic Cemetery in New Washington, Ohio. Guests are invited to wear Cleveland Indians attire in his honor for the visitation. Memorial contributions may be made to St. Bernard Catholic Church. Online condolences may be made to the family at www.secorfuneralhomes.com.

The Mynhier Family sends our deepest sympathy to the Donnersbach Family. Charles was a great husb and to Twila and considerate and kind to the Mynhier and Hosey Family. We all will miss him as well.

Our thoughts and prayers go out to the whole family. We have fond memories of Charlie at the family gatherings. His mind was very sharp, and he could always beat me at growing tomatoes.
May he rest in peace.
John & Ana Nicholson

To the family of Charlie: I offer my sympathy at the loss of your father, brother and grandfather. I enjoyed being around the Donnersbach family way back in the early 60’s on. Will keep all of you in my prayers here. LOVE, Annie (Anne) Utrup Landwehr Ottoville Oh