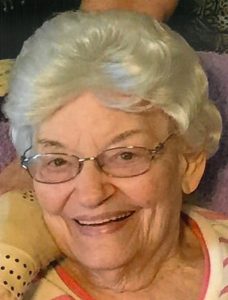 Estella M. Gathergood Kehres, age 93, resident of New Washington, Ohio passed away on Thursday, January 5, 2017 at the Willows at Willard. She was born on June 5, 1923 in Norwalk, Ohio to the late Joseph F. and Estella H. (Smith) Koepele, the second oldest of seven daughters. Estella was a 1941 graduate of Norwalk St. Paul’s High School and had been employed in the offices of the former Norwalk Truck Lines, the former Norwalk Furniture Company and Mid-Way Inc. in Monroeville.
On August 1, 1942 she married John Gathergood and they had three girls and a son. John passed away in February of 1994 after 52 years of marriage. In May of 1998 Estella then married Gerald Kehres of New Washington and moved there.
Estella was the former Huron County Chairman of the 1978 Cancer Drive, was a Lector and Eucharistic minister for ten years at St. Joseph Catholic Church in Monroeville, a volunteer pink lady at Fisher-Titus Hospital for ten years, and a volunteer for Stein Hospice in Sandusky. Estella was a thirty year member of the American Legion Auxiliary, an original member and past president of the Golden Eagles Senior Citizens of Monroeville, a member of the Wisdom People of Monroeville, and a member of the Golden Gems. After moving to New Washington, she was a Lector and Eucharistic minister at St. Bernard Catholic Church for ten years.
She took many classes to learn arts and crafts and enjoyed knitting, crocheting, quilting, ceramics, chair caning, stain glass, oil painting, decoupage and flower arranging. She also loved to bake and play euchre.
She is survived by her husband, Gerald Kehres; three daughters, Susie (Dave) Colahan, Phyllis (Perry) Payne, and Linda (Bill) Henrie; a son, Bill (Bonnie) Gathergood; a step-daughter, Vickie Johnson; and a step-son, Mike (Andrea) Kehres; 14 grandchildren; 27 great grandchildren; 7 step-grandchildren; and 10 step great grandchildren; three sisters, Ethel Missler, Mary Cutnaw, and Teresa Zyski.
In addition to her parents, she was preceded in death by her first husband, John Gathergood, and three sisters, Leona Reilly, Anne Stimmel, and Clara Boyd.
Friends may call at the Secor Funeral Home in New Washington, Ohio on Sunday, January 8, 2017 from 2:00 to 5:00 P.M. Funeral Mass will be Monday, January 9, 2017 at 11:00 A.M. at St. Bernard Catholic Church in New Washington with Father Frank Kehres officiating. Burial will take place at St. Joseph Catholic Cemetery in Monroeville. Memorial contributions may be made to Stein Hospice or St. Bernard Catholic Church. Online condolences may be made to the family by visiting www.secorfuneralhomes.com

My condolences to Estella’s family.
My mother, Thelma Wilcox was the first ALS patient with Stein Hospice. Estella would come to her home to stay with her while my father took a break from her constant care.
Estella was a very compassionate and caring lady. and
my mom looked forward to her visits. We remember her and thank her for her service and you will rejoice in her life. God bless, Nancy

Dear Gerald , With much sadness and prayers, we express our deepest sympathy to you and your family! Our sharing of many good times and laughter will well be remembered! May Estelle rest in Eternal Peace with our Heavenly Father! Our love ❤️ is with you, Gerald! Fondly, Suzi & Jim

May she rest in Eternal Peace with the Angels! Fondly, suziTY41p