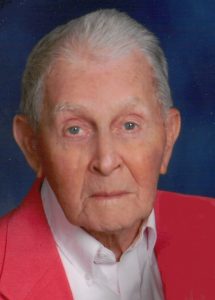 Floyd Nelson McQuown, age 99, resident of Willard, Ohio passed away on Friday, November 25, 2016 at the Crestwood Care Center in Shelby. He was born on May 26, 1917 in Forest, Ohio to the late Bruce and Mary (Harman) McQuown. He served in the U.S. Army and U.S. Air Force, had retired as a Pilot on B24 Bomber and was a Prisoner of War. He was a flight instructor in Willard, retired from the B&O Railroad and was a member of the Ohio Soaring Club in Marion. Floyd had volunteered at Willard Mercy Hospital and Habitat for Humanity. He was also a faithful member of First United Methodist Church of Willard.
He is survived by a son, James (Pamela) McQuown of Elyria; grandchildren, Kelly (Christopher) Sprague of Powell, Ohio and Jason (Amanda) McQuown of Westerville, Ohio; He was also the proud great-grandfather of Morgan Sprague and Emerson and Payton McQuown.
Along with his parents, he is preceded in death by his wife of 73 years, Thelma Jayne McQuown; sisters, Beulah Clinger and Madalyn Shields; brothers, Noel, Norman and Kenneth McQuown.
Visitation will be on Tuesday, November 29, 2016 from 11:00 A.M. to 12:00 P.M. at the Secor Funeral Home, 202 W. Maple St., Willard, Ohio 44890 and where the funeral service will be 12:00 P.M. with Rev. Doug Beggs officiating. Burial will follow at the Greenwood Cemetery in Willard, Ohio. In lieu of flowers, memorial contributions may be made to First United Methodist Church, 401 E. Howard St., Willard, Ohio 44890 or a charitable organization of choice. Online condolences may be made to the family at www.secorfuneralhomes.com

Of all the gifts I ever received, the gift of being taught to fly was one of the greatest gifts of all. I’ve spent almost my entire life flying and without Shorty, the joy of flying would not have been mine. I’ll remember him always with gratitude.

We are so sorry to hear about Uncle Nelson’s passing. He was am amazing man and our Mom thought the world of him and his family. Sincere condolences to all. Karen and Dick
‘