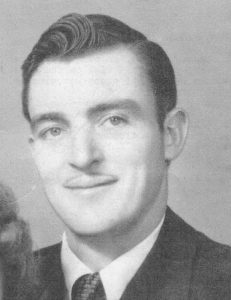 Gomer John Patrick, age 91, of 533 West Pearl Street Willard Ohio died at 10:20 a.m. Saturday, January 17, 2009 at Willard Healthcare Center in Willard, Ohio.
Gomer was born June 6th, 1917 in Salyersville Kentucky to Elizabeth Olive (Davis) and John Franklin Patrick.
Gomer was retired from the B&O (Baltimore and Ohio) Railroad, for the Akron Chicago Division, Willard Ohio. During his time of employment, he also witnessed the transition from steam to diesel engines. In the early morning and late afternoons, he enjoyed sitting in a lawn chair and watching the passing trains.
Aside for his love for trains, he shared in an antique business formerly owned by his beloved wife of 62 years, Pearl Patrick, who preceded him in death in April of 2007.
Gomer is survived by his daughter, Mary Ann Brooks of Ogden,Utah; sons Franklin Winston Patrick of Bucyrus, Ohio, Gomer Patrick Jr. of Sausalito, California, Michael Hager Gene Patrick and Vance Edward Patrick , both of Phoenix, Arizona; twelve grandchildren, two step-grandchildren, twenty four great-grand children and two great-great grandchildren
Calling hours will be held on Thursday, January 22, 2009 at the Christain Missionary Alliance Church of Willard, Ohio from 10:00 to 11:00 AM where the funeral services will be held at 11:00 AM. Private burial to be held atMaple Grove Cemetery in New Haven, Ohio. Secor Funeral Home in Willard assisted the family with arrangements. Condolences can be sent to P.O. Box 413 Attica Ohio 44807 or online at www.secorfuneralhomes.com. Memorials contributions can be made to the Alzheimer Association.

I was looking something up on the website and it does not seem like it was over a year ago. I was close to my grandparents and miss them so much. Sure is a lot of memories tho.

In loving memory of a kind and gentle soul.May God comfort the hearts of the family during this time of loss. David & Sheila Tackett & family, Plymouth/Willard

Grandpa was a very loving, giving and kind man. I pray he is in a better place where he can be himself. My prayers go out to my mom Mary Ann who I know dropped her own life when ever he was in need. God bless you both and may God ease your pain.

With love to all my cousins,I share your sorrow for your beloved father[my uncle]Love Billie