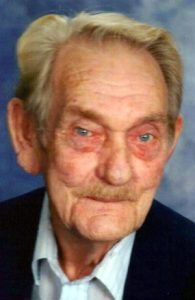 Harvey E. Robinson, Sr., age 90, resident of Galion, Ohio passed away on Saturday, September 5, 2015 at the Signature Health Care Center in Galion. He was born on October 22, 1924 in Plymouth, Ohio to the late Charles and Lotta (Baker) Robinson and had been a Plymouth resident the majority of his life. Mr. Robinson had worked at several area auto body shops and retired from Schaff’s Auto Body in New Haven, Ohio. He served in the US Army during WWII and was lifetime member of the Plymouth American Legion Post #447. He was also a member of the former Richland Masonic Lodge in Plymouth. Harvey was an avid hunter, fisherman and bowler and was a state archry champion.
He is survived by his wife, Lila L. (Dininger) Robinson whom he married on October 15, 1988; four children, Sunday (Paul) Winans of Willard, Martha Jo Lasch of Shelby, Nancy (Rodney) Gillam of Galion, and Harvey II (Jennifer) Robinson of Lexington; 9 grandchildren; 19 great grandchildren; and 2 great great grandchildren; a sister, Margarette McKenzie of Douglasville, GA; 2 step-children, Sandy (Randy) Pifher of New Washington, and Chris (Dan) Campbell of Galion; 7 step-grandchildren; and 12 step-great grandchildren.
In addition to his parents he is preceded in death by his first wife, Martha (Striker) Robinson in 1987; a granddaughter, Cheryl Allen; a sister, Elvinia Wiers; and step-son, Richard Strohm.
Friends may call at the Secor Funeral Home in Plymouth, Ohio on Tuesday September 8, 2015 from 5:00 to 8:00 PM. Funeral services will be held at the funeral home on Wednesday at 10:00 AM with Pastor George Mays officiating. Burial will follow in Maple Grove Cemetery in New Haven. The family invites friends to attend a luncheon at the Plymouth America Legion following the funeral. Memorial contributions can be made to the Plymouth American Legion. Online condolences can be made at www.secorfuneralhomes.com

My deepest condolences to the Robinson family, may you find comfort in prayer and the beautiful words of Isaiah 25:8 where God promises us that He will soon eliminate all death and suffering.

Prayers going up for your wonderful family & friends. I know Mr. Harvey will be greatly missed.

Dear Family and Friends Of Harvey,
Harvey will be greatly missed. We attended Plymouth High School and he always had a smile on his face. Years later when ever we met, he always took the time to say Hello and spend a few minutes talking about the good old days. He was a good friend. You have my deepest sympathy, May God Bless.