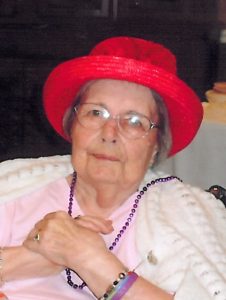 Helen E. Sell, age 91, passed away on Saturday, January 29, 2011 at the Willard Healthcare Center Nursing Home in Willard, Ohio. She was born on January 23, 1920 in Pittsburgh, PA to the late Albert A. and Rose (Froelke) Sutter. She was a member of the St. Francis Xavier Catholic Church in Willard , where she taught CCD for many years.
She is survived by 3 daughters, Mary Ann (George) Schwane of Blairsville, GA, Ginny Lee (Tom) McCarty of Orange Park, FL and Christine Sell (Jim Hilliard) of Cleveland, Ohio; 2 sons, Msgr. Robert L. Sell III of Lafayette, IN and John J. (Margaret A.) Sell of Willard; 18 grandchildren and 43 great grandchildren; 2 sisters, Sara Butcher of Parkersburg, West Virginia and Dorothy Craig of Virginia Beach, VA.
In addition to her parents she is preceded in death by her husband, Robert L. Sell Sr.on November 24, 2008; 2 sons, Robert Jr. and Albert Sell; a daughter, Margaret Rose Phillips; grandson, Gabriel Phillips and 2 sisters, Ada Mae Sutter and Rose Mary Barlow.
Friends may call on the Secor Funeral Home in Willard, Ohio on Tuesday, February 1, 2011 from 4:00 to 7:00 P.M. and also on Wednesday from 9:30 to 10:30 A.M. at the St. Francis Xavier Catholic Church in Willard. Funeral Services will be held on Wednesday, February 2, 2011, at 11:00 A.M. at the St. Francis Xavier Catholic Church in Willard, with Msgr. Robert L. Sell III and Fr. Stanley S. Szybka officiating. A graveside service will be held at a later date at the St. Joseph Catholic Cemetery in Willard. Memorial contributions may be made to the St. Francis Firelands Right To Life, 3285 State Route 103 East, Willard, Ohio 44890 or to the Partners in Hope, (St. Jude’s Children Foundation), 501 St. Jude Place, Memphis, TN 38105. Online condolences may be made out to the family at www.secorfuneralhomes.com

Know that we will keep you and your family in our prayers. I was saddened to hear of your mom’s passing. I was just talking to David at the basketball game on Friday and he told me that she wasn’t doing very good. I was planning on coming to the funeral home to pay my respect but because of the weather was unable to. Please accept my condolences. I know how much your hearts must ache as I have lost both of my parents. God has called her home and she is now with all of her loved ones that passed before her. They were waiting with open arms for her. Praying that your days will be filled with all of her loving memories and know she is with OUR DEAR LORD now.

Many nice memories of Helen. She cared about others and especially her role as a CCD teacher at ST. Francis.

Our Deepest Sympathy for family and Prayers for Aunt Helen. I hope someone can send a prayer card from the funeral home to me.
address:
Mary Ellen Petch
1664 S 2450 E
Spanish Fork, Utah 84660

Mary Ann, Ginny, Christine, Robert and John: I am so sorry to hear the news that your Mother is gone. I hope there is comfort for you in knowing that her suffering is over. Time will leave you with beautiful memories, and she will live on in your hearts. Be well, and take good care.
Best always,
Cousin Dan