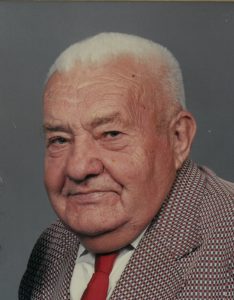 Ivan L. Langjahr, age 94, of New Washington, Ohio passed away Thursday, January 22, 2015 at Galion Pointe Nursing Home where he was a resident for the past 6 years. He was born on July 27, 1920 to the late Adolph and Odillia (Kurtz) Langjahr. He was a farmer and employed at the former Rainbow Hatchery, as well as, C.E White Co., both in New Washington. Ivan was a lifelong church member at St. John’s Lutheran Church, past church custodian, and cemetery sexton. He is a veteran of the U.S Army having served in WWII. Prior to his stroke in 1999, he enjoyed his family, home, church, farm and animals. He loved to eat, particularly Bertha’s cooking and baking. As the girls were growing up, he always enjoyed yearly summer trips to Cedar Point, Ohio State Fair, and parades.
Ivan is survived by 3 daughters, Roxann (Ken) Cramer of Bucyrus, Janell (Richard) Benner of New Washington, Angela (Eric) Schiefer of Bucyrus; 3 grandchildren, Tammy Cramer Hall of Bucyrus, April Schiefer and Dale Schiefer, both of Columbus; twin great granddaughters , Haylee and Kaylee Hall.
In addition to his parents, Ivan is preceded in death by his wife, Bertha (Schwaderer) Langjahr in 2012; 2 brothers-in-law, Clinton and Robert Schwaderer; and 1 sister-in-law, Elnora Schwaderer.
A private graveside service will be held at St. John’s Lutheran Cemetery Monday, January 26, 2015 with Rev. Tom Pairan officiating. In lieu of flowers, memorial contributions can be made to St. John’s Lutheran Church New Washington, Ohio. Online condolences may be made to the family at www.secorfuneralhomes.com