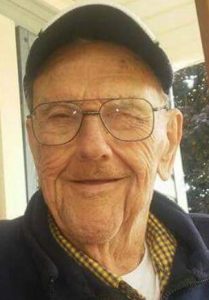 Kenneth S. Shaffer, age 81, resident of Shiloh, Ohio passed away on Friday, September 16, 2016 at his home. He was born on July 21, 1935 in Shelby, Ohio to the late Emerson and Doris (Davis) Shaffer and had been a lifelong Shiloh resident. Mr. Shaffer had been employed at the former Fate-Root-Heath in Plymouth and retired from the Richland County Highway Department where he was a heavy equipment operator. He served in the US Navy during the Korean Conflict and later re-enlisted in the US Army during peacetime. He was a member of the Mt. Hope Lutheran Church in Shiloh, a lifetime member of the Shiloh American Legion Post 503 and the Shelby VFW Post 291. Kenny enjoyed fishing, the outdoors and family gatherings.
He is survived by four children, Larry (Margie) Shaffer of Shiloh, Pam (Ron) Reber of Derby, Iowa, Cheryl Howard (Johnie Deskins) of Shiloh, and Kate Means (Jeff Clabaugh) of Shiloh; 13 grandchildren; 17 great grandchildren and one expected in November; a brother, Dean (Elisabeth) Shaffer of Shelby; an uncle, Mike (Janice) Davis of Ontario; nieces, nephews and other relatives.
In addition to his parents he is preceded in death by his wife, Dorothy (Porter) Shaffer in 2003; two brothers, Richard and Larry Shaffer; and his best dog, Curly.
Visitation will be held at the Secor Funeral Home in Plymouth, Ohio on Monday, September 19, 2016 from 5:00 to 8:00 PM. Funeral services will be held on Tuesday at 11:00 AM at the Mt. Hope Lutheran Church in Shiloh with Reverend Blanche Tyree officiating. Burial will follow in Mt. Hope Cemetery in Shiloh. Memorial contributions can be made to the American Cancer Society. Online condolences can be made at www.secorfuneralhomes.com

Condolences to the Family.Kenny and Dorothy will always be remembered as Shiloh icons. They are together again. Prayers for you all.

On behalf of the Plymouth Shiloh Food Pantry volunteers and client families, we wish to express our deepest sympathies to the Shaffer family. Kenny was our friend for many years and will always hold a special place in our hearts. Know that you are held in our prayers and thoughts.

To the Family of Ken…
My thoughts n prayers go out to each and every one of you. He will never be forgotten. God Bless.

My prayers go out to all the kids. We were neighbors and friends for years and I have a lot of memories of the entire family. I regret that I can not get to Shiloh for the services. Will be thinking of all of you and praying.