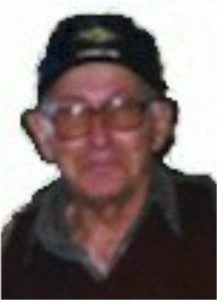 Louis John “Louie” Lillo, 89, resident of Plymouth, passed away Aug. 7, 2007 at Mansfield MedCentral Hospital. Louis was born May 30, 1918 on Bullhead Road, Willard, Ohio to the late Charles and Consuela (she was called Ceceilla) (D’Alessandro) Lillo. He had 3 brothers and 5 sisters. He attended Richmond School, Willard, Ohio. He was married 70 years to Josephine (Cavello) Lillo. They had 3 children.
Louis lived in this area all of his life. He served in WWII in the Philippine Theater. He was a member of the American Legion, Plymouth; He was both a volunteer fireman and a auxiliary policeman in Plymouth. He volunteered the laying of the cement block for the football field bleachers in Plymouth’s Mary Fate Park and did the masonry work of the Plymouth Post Office, the original Hartenstein’s Restaurant. He installed the vault in the Plymouth Bank. He is known for his love of gardening and he gave away vegetables to many friends and family.
He worked for Stacy Haun Construction Co. in Shelby and Fate,Root, Heath in Plymouth. He had a self-employed business as a contractor and was known for speed and accuracy of his brick laying ability.
He is survived by his son Louis Michael Lillo of New Haven; four grandchildren: Todd of Norwalk, Nicole of Florida, John and wife Suzanne (Hayek) of Jacksonville, FL, and Joseph of Atlanta; a daughter-in-law Mrs. Gerald (Maxine) Lillo of Willard; two sisters: Mary Stewart of Willard, Margaret (Glenn) Hicks of Shelby. a brother-in-law and sister-in-law, Anthony and Mickey Cavello of Centerton.
He was preceded in death by his parents, his son Gerald, Willard (1997), his daughter Suzanne Belcore in 2003; three brothers, Tony, Joe, and Frank Lillo. three sisters, Josephine Hicks, Anna Elliott and Rosie Rowe.
Friends may call at the Secor Funeral Home in Willard on Friday, August 10, 2007 from 3 to 6 PM. Funeral services will be held at the funeral home on Saturday at 1:30 PM with Father Stanley S. Szybka officiating. Burial will follow in St. Joseph Catholic Cemetery. Online condolences can be made at www.secorfuneralhome.com