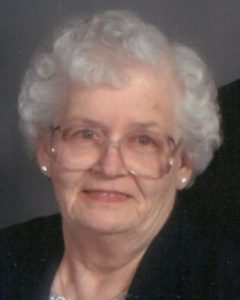 M. Eileen Shealy, age 89, resident of Bucyrus, Ohio and former New Washington, Ohio resident, passed away on Tuesday, July 11, 2017 at Carlisle Place in Bucyrus, Ohio. She was born on September 1, 1927 in Portsmouth, Ohio to the late Richard L. and Margaret (Davisson) Mull. Eileen had been employed at the Wright-Patterson Air Force Base in Dayton, Ohio where she meet her late husband, Dalton, and later was employed as an attorney’s secretary. She was a member of the St. John’s Lutheran Church in New Washington and attended the Good Hope Lutheran Church in Bucyrus. She enjoyed cooking, quilting, traveling and playing canasta.
She is survived by two sons, Richard L. (Betty) Shealy of Bucyrus, and John D. (Jodi) Shealy of Marysville; four grandchildren, Melissa Stiltner, Kimberly (John) Chavatzas, Phillip Shealy, and Evan (Carly) Shealy; four great grandchildren, Andrew Stiltner, Meghan Stiltner, Jacob Chavatzas, and Emily Chavatzas; and a son-in-law, Garry Brewer.
In addition to her parents, she was preceded in death by a daughter, Judith Brewer and an infant brother.
A private memorial service will be held at the Secor Funeral Home in New Washington, Ohio on a later date. Burial will be in the St. John’s Lutheran Cemetery in New Washington. Memorial contributions can be made to the American Heart Association or to the donor’s choice. Online condolences can be made at www.secorfuneralhomes.com

So sorry to read about your mother no matter if it was expected or not it is hard to have a parent die. My prayers are with you. Stop in sometime to visit. Miss all conversations that was here with my talkative husband over the years.