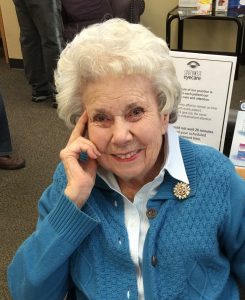 Margery Ann Hetsler Page of Albuquerque, NM passed away on June 2, 2017 at the age of 96.
On September 15, 1920 Margery was born to Lloyd M. and Beatrice Endinger Hetsler in Ashland, OH. Margery had a wonderful childhood and loved recounting stories of her escapades growing up in a small college town including, ‘seeing what would happen when a garden hose was allowed to run full blast at the top of the stairs in her next door neighbor’s house’, ‘eating leftover meat loaf from a friend’s refrigerator which turned out to be canned cat food’, ‘packing a friend’s car full of dry, crunchy, messy autumn leaves’, and ‘attending magical dances in the 2nd floor ballroom at a local millionaire’s mansion’.
During high school, Margery was a flutist in the award winning Ashland High School Band, Orchestra, and Orchestra Ensemble and a member of the National Honor Society. She attended Ashland College and Flora Stone Mather School of Nursing before marrying Jack W. Page, also of Ashland, in 1942. As a young wife and mother, Margery served as president of the local Civic Welfare League, president of the Girl’s Dance Club, and as a Cub Scout Den Mother as well as co-owner and bookkeeper of Page Chevrolet and Oldsmobile in Ada, OH.
In 1959, Jack and Margery relocated their family to Albuquerque, NM where they co-owned Page Servisoft Water Conditioning and again, Margery was the bookkeeper, until 1985 when she and Jack retired. In addition to helping manage the water conditioning business in Albuquerque, Margery was a member of the Cosmopolitan Women’s Club of Albuquerque; played bridge weekly for over 40 years; and served as president and longtime active member of the United Methodist Women of St. John’s United Methodist Church and Naomi Circle. She also served as president of the Bataan Memorial Methodist Hospital Auxiliary (later known as the Lovelace Hospital Auxiliary) and logged over 2500 volunteer hours for the auxiliary over her 40 year involvement with the organization.
Through her 90’s, Margery continued to contribute to her community by knitting hundreds of wool hats and layettes which she donated to The Salvation Army, various Albuquerque elementary schools, and UNM’s Cancer Center.
Margery was preceded in death by her husband, Jack, in 2014. She is survived by her son, James Winfield Page and his wife, Marjorie of Albuquerque, NM; her daughter, Polly Page and her husband, Richard Crocker of Oro Valley, AZ; as well as her cousin, Sherry Burns of Ashland, OH; two grandchildren; six great-grandchildren; four nieces and five nephews.
Interment will take place at Mount Hope Cemetery in Shiloh, OH. Memorial contributions in Margery’s honor may be made to The Salvation Army at www.salvationarmyusa.org. Online condolences can be made at www.secorfuneralhomes.com