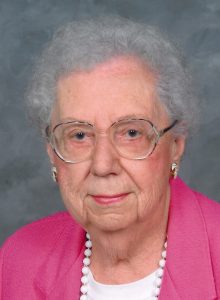 Mary Darlene (Walimire) Cummins, age 96, passed away on Monday, June 20, 2011 at Altercare of Bucyrus Center in Bucyrus, Ohio. She was born on September 5, 1914 in Chatfield, Ohio to the late Russell and Fairy (Williams) Walimire. At age seven, Darlene’s mother passed away and she was raised by her aunt and uncle, Iona and Clarence Nigh, who were the parents of Leona (Nigh) Gearhart, whom she always considered as her sister. She was a 1932 graduate of New Washington High School and married Robert Cummins on Oct. 2, 1940 and who died in 1991. She had been a telephone operator in Norwalk and New Washington after graduating high school. Darlene and Bob later operated a small grocery store which was the former Ott’s Grocery in New Washington for several years.
She was a member of the New Washington United Methodist Church and was the church’s pianist. Playing the piano was one of her lifelong passions. She was a Past President of the Carl A. Geiger American Legion Post #405 Ladies Auxilary and also a partner of the Crawford County Salon 8&40.
She is survived by a brother, Doyle Walimire of Bucyrus, a nephew, Larry Walimire of Bucyrus, two half sisters, Ruby Jean Ridenour of Mansfield and Geraldine (Willard) Wycoff of Mansfield; and special cousin, Leona (Nigh) Gearhart of Johnstown, Ohio.
She is preceded in death by her husband, Robert Cummins and her parents, Russell and Fairy (Willaims) Walimire.
Friends may call at the Secor Funeral Home in New Washington, Ohio on Thursday, June 23, 2011 from 1:00 to 2:00 PM where the funeral service will be Thursday at 2:00 PM with Reverend Peter Rohan officiating. Burial will follow in Brokensword Cemetery in Brokensword, Ohio. Memorial contributions can be made to Homecare Matters Home Health Hospice 1220 North Market St. Galion, OH 44833. Online condolences can be made at www.secorfuneralhomes.com