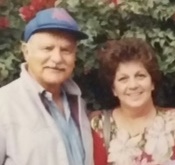 Nancy Jane (Androsac) Sherck, 67, of Willard, Ohio, passed away at 11:23 P.M., Friday, June 3, 2016 at The Willows at Willard.
Nancy was born October 7, 1948, in Willard, OH to the late Joseph and Marie (Herbert) Androsac Sr. She married John Sherck on December 16, 1978, and he survives in Willard.
Nancy is survived by a daughter, Michelle Shepherd of Lakeview, OR; son Michael Shepherd Sr. of Mentor, OH; three stepsons, Michael, Greg and William Sherck of Willard, OH; eight grandchildren, Matthew, Ryan and Austin Chambers and Alexander, Desiree, Jadelynn, Michael Jr. and Charlotte Shepherd; two great grandchildren, Collin and Emma Chambers; brothers, John (Karen) Androsac, Conrad (Liz) Androsac, Thomas Androsac and Joseph (Janet) Androsac Jr.; sisters, Rose Dannemiller, Linda (John) Wise and JoAnn (Larry) Briggs and many cousins, nephews and nieces.
She was proceeded in death by her parents Joseph and Marie Androsac, sister in law Carol Androsac and son in law Mark Chambers.
Nancy was the bakery and deli manager for Moore’s IGA until she retired to travel the United States in 1989. Nancy and her husband John moved to Twain, CA in 1995 and was employed by Northwest Park Management as a camp host for several years and was a member of The Ladies of Twain.
Nancy loved adventure, nature, family and her cats. She enjoyed crossword puzzles, baking and gambling. She was a true inspiration to many. She endured declining health issues for nearly a decade, but still enjoyed life, family and friends.
Secor Funeral Home in Willard, Ohio handled the arrangements. Memorial contributions can be made to the Humane Society. Online condolences may be shared to the family by visiting www.secorfuneralhomes.com

I miss you today and every day. I can’t imagine the rest of my life without you.

So sorry for your loss.

To everyone that knew my Aunt Nancy. She was a kind soul, full of love. She loved her pets, the outdoors and was the most fun when I was a little boy. I only wish I would of been able to of been in her life more than I could be. My prayers and best wishes go out to her husband John, and my cousin Michelle.
Uncle’s Connie, Tommy, Joey, my loving Aunt’s Linda, Rosie & Pheenie. Love you, your cousin & nephew, John

Our condolences to the family. Another angel gets her wings…