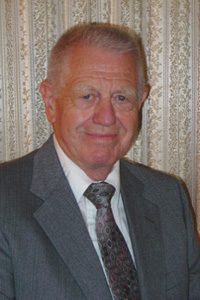 Norman Lee Smith, age 84, resident of Willard, passed away Saturday, November 14, 2009 at the MedCentral Hospital in Mansfield, Ohio. He was born March 17, 1925 in Willard, Ohio and has lived in the Willard area all of his life. He was a 1943 graduate of North Fairfield High School. Served his country in the USNR V6 program where he received amphibious training, whose ship was the LSM and his tour of duty included the Pacific/China theater during WWII. He was discharged in 1946 with the rank of Yoeman 2nd Class. He was employed at the Pioneer Rubber Company from 1946 to 1976, resigning as Division Credit Manager and retiring as Office Manager in 1990 from Brooker Bros. Forging Co. in Norwalk, from 1990 to the present he has been employed with Secor Funeral Homes as a funeral assistant. He was a Willard City Councilman from 1969-1973, an advisor to the former Junior Achievement Program, served on the Huron County Election Board, was a Republican Committeeman, Past Chairman of the Firelands Chapter American Red Cross, and a current board member. A 40 year member of the National Association of Accountants, Mansfield Chapter, a former Boy Scout Committeeman. He was currently an active member of Grace United Methodist Church, Willard Area Historical Society, a 50 year member of the B.P.O.E., the North Fairfield American Legion and has been a member of the American Bowling Congress for 50 years. He also enjoyed golf, dartball and euchre.
He is survived by his wife, Carolyn A. (Huffman) Smith, whom he married Oct. 17, 1953; two daughters and sons-in-law, Linda and Bob Mitchell of Phoenix, AZ; and LeeAnn and Ron Inmon of Greenwich; a son, Daniel Smith ; 7 grandchildren and 9 great grandchildren; brother, Merlin “Doc” (Virginia) Smith of Willard and a sister-in-law, Jean Smith of Willard.
He is preceded in death by his son, David Smith in 1992, an infant son, infant granddaughter; his parents, Charles and Gladys (Eastman) Smith; and a brother, Haldon C. Smith.
Friends may call at the Secor Funeral Home in Willard on Tuesday, November 17, 2009 from 2-4 P.M. and 6-8 P.M.. Funeral services will be held at the Grace United Methodist Church in Willard on Wednesday at 11:00 A.M. with Rev. Doug Winner officiating. Burial will follow at the Greenwood Cemetery in Willard, Ohio. Memorial contributions may be made to the American Red Cross or the Grace United Methodist Church Special Fund. Online condolences may be made to the family at www.secorfuneralhomes.com

I do not know Norm”s family. But I have met Norm several times. Everytime I saw Norm he had a smile on his face,and was willing to due all that he could to help people out that where having a bad time. I hope I learned alot from Norm. He is surely being blessed by God, and I will never forget him.
Scott Robertson, Chief of Police New Washington

Carolyn, We are so sorry for your loss. We will always remember Norm’s smile and kindness. Our prayers are with you and your family during this difficult time.

Carolyn and Family – Barbara and I send our sympathy on the death of Norman. He was such a gracious man and always had a warm smile and warm greetings for us. We pray you will take comfort in the many prayers offered in faith for you. Living with you in God’s amazing grace. Bill and Barbara Wolfe

Carolyn, we were saddened to learn of Norm’s passing – it’s far too soon. Please accept our condolences on behalf of your entire family.

Carolyn and Family, We are saddened by Norm’s passing. Please accept our deepest condolences. Our thoughts and prayers are with you. God bless. Mark & Helen Braddock

Lee Ann, Carolyn and family, It is so sad to learn of Norm’s passing. He was a great man in this community and will be greatly missed by everyone. Please know that our thoughts and prayers are with all of you at this trying time. Chuck Mullen and Jeri Laser

Danny and Family, So sad to hear of your loss. We go back so far and Norm always treated us kids as one of his own growing up. My thoughts and prayers are with you all. Donnie

To the Smith family,
Please accept our condolences on Norm’s passing. What a wonderful person he was! He was such a kind and gentle man. May it help to know that others care and share in your sorrow. May God Bless you.
Cynthia and Dennis Branham
Herb and Hazel Lewellen

Carolyn, Danny, Lee Ann and family,
We are so sorry about your loss of Norm.
We are thinking of you and our prayers go out to you all at this sad time.
Keep thinking of all the good memories you have of Norm .

Mrs. Smith and family,
I am truly sorry for your loss. Each and every time I would run in to him, no matter if it were golfing or at the funeral home, he always was very warm and gracious. I never remember anything but pleasent words being spoken about him. He was truly a wonderful man and it was a pleasure to have known him. May God Bless.

Leeann and Ron, David and my prayers are with you and your family at this time.Our deepest condolences.

Aunt Carolyn, and cousins Lee Ann and Danny….I am so so saddened about the loss of this fabulous man! My heart goes out to each of you with many hugs and lots and lots of love…..
love, Connie

Carolyn, we are thinking of you and praying for the whole family.May God give you strenth and comfort for these days. Though far apart our prayers continue on your behalf.
Friends thru Christ,
Dottie and Dick Chase