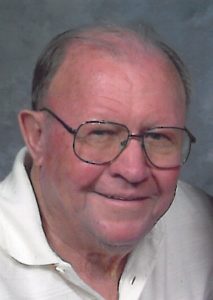 Orbin D. “Hack” Hackworth, age 89, resident of Willard, Ohio, passed away on Tuesday, May 8, 2012 at his home. He was born on May 24, 1922 in Johnson County, Kentucky to the late Martin and Malta (Colins) Hackworth and had been a Willard resident all his married life. He was a 1940 graduate of Jenny’s Creek High School, and then attended Morehead State University. He retired in 1980 from the United States Department of Defense as a Division Chief in the Directorate of Technical Operations and had worked at the Wilkins Air Force Depot in Shelby, Brookley Air Force Base in Mobile, Alabama, Wright-Paterson Air Force Base in Dayton, Ohio and DCSC in Columbus, Ohio. He was a member of the St. Francis Xavier Catholic Church in Willard and served in the US Army during WWII in the Eurpean Theatre.
He is survived by his wife of 61 years, Anne I. (Lillo) Hackworth whom he wed August 12, 1950; and numerous nieces and nephews.
In addition to his parents he was preceded in death by one brother, Bille E. Hackworth; three sisters, Iva Trimble, Alva Vaughan and Lucy Smith; and an infant sister, Oakey Hackworth.
Friends may call at the Secor Funeral Home in Willard on Thursday, May 10, 2012 from 4:00-7:00 PM. Friends may also call on Friday, May 11, 2012 at the St. Francis Xavier Catholic Church from 10:00 AM until the time of the funeral mass at 11:00 AM, where Father Eric Culler will officiate. Burial will follow in St. Joseph Catholic Cemetery in Willard, Ohio. Memorial contributions may be made to the St. Francis Xavier Catholic Church or Stein Hospice of Sandusky. Online condolences may be made to the family at www.secorfuneralhomes.com.

We wish you comfort in your time of sorrow. Have peace knowing Orbin is now back home.