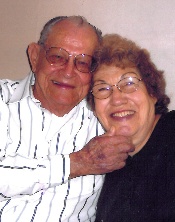 Raymond E. Funk, Sr., age 83, resident of Willard, Ohio went to be with the Lord and his beloved wife, Angie on Sunday, February 15, 2009. He was born April 25, 1925 in Tiffin, Ohio to the late Jesse and Ellen (Grogg) Funk and had been a Willard resident the majority of his life. He and his wife had retired to Kingman, AZ for 19 years. Mr. Funk was a 1943 graduate of Willard High School and was a retired Engineer from CSX Railroad in Willard. He was a veteran of the US Navy serving on the USS Pelias during WWII. He was a member of the St. Francis Xavier Catholic Church, the Willard American Legion and the Willard VFW. He enjoyed watching and reading westerns, collecting coins and traveling out west, growing and tending to his rose garden and spending time with family. He also enjoyed reminescing with his old railroad buddies.
He is survived by a daughter, Mary (Darwin) Weatherbie of Monroeville, OH; a son, Ray (Nancy) Funk, Jr. of Carey, OH; six grandchildren, April (Steve) Hoak of Mason, OH; Chris (Michele) Weatherbie of Dandridge, TN; Brett (Dawn) Funk of Dayton, OH; Todd (Stacy) Weatherbie of Shelby, OH; Erica (Jason) Arend of Carey, OH; Ashley (Dan) Anders of Brooklyn Heights, OH; sixteen great grandchildren, Jordan, Kira, Matthew and Josh Hoak; Mason, Alexi, Blake and Reese Funk; Elliana and Jazdin Weatherbie; Isabella, Malia and Ava Weatherbie; Sydney and Sadie Arend; Aubrey Anders; two sisters, Shirley Gibson of Dola, OH; and Sheron Hosler of North Ridgeville, OH; a special cousin, David Funk of Prescott, AZ; and several nieces and nephews.
In addition to his parents he is preceded in death by is wife Angelina (Quintana) Funk on August 26, 2008; and a brother, Leonard Funk. .
Friends may call at the Secor Funeral Home in Willard, Ohio on Friday, February 20, 2009 from 2-4 and 6-8 PM where a vigil service will be had at 8:00 PM. Funeral Mass will be celebrated on Saturday at 11:00 AM at the St. Francis Xavier Catholic Church in Willard with Father Stanley S. Szybka officiating. Burial will follow in St. Joseph Catholic Cemetery in Willard with full military rites. Memorial contributions can be made to the St. Francis Xavier Catholic Church or the Stein Hospice of Sandusky. Online condolences can be made at www.secorfuneralhomes.com

My condolence to the family. Ray will be greatly missed.

Ray and family my sincere condolences are with you and your family. You are in my thoughts and prayers. Stacie Hankins – TRECA

Mary, we are so sorry for the loss of your dad. Both your parents were such wonderful people. Our thoughts and prayers are with you,Darwin April,Chris and Todd. With Sympathy, Hargus and Gracie Dials

Todd and family –
My thoughts and prayers are with all of you during this time. Please know you are all in God’s care.

Ray and Family – My sincere condolences to all of you. I am sure that your father will be deeply missed. Please know that you are in my thoughts.
Dianne Grafmiller
Upper Sandusky Schools

MY HEART GOES OUT TO RAY JR AND MARY AS WELL AS THERE FAMILYS.YOUR DAD WAS A GREAT MAN HE WAS HONEST AND ALWAYS TRIED TO DO WHAT HE THOUGHT WAS BEST FOR EVERYONE HE KNEW.HIM AND ANGIE HAD A LIFE OF FULLFILLMENT THAT I HOPE AND PREY WE ALL CAN SEE AND LEARN FROM BECAUSE THEY BOTH LIVED THERE LIVES AROUND THERE FAMILYS BUT TRIED NOT TO INTERFERE WITH EACH INDIVIDUALS GROWTH.IKNOW MY DAD AND RAYMOND ARE TALKING AND LAUGHING AS WE SPEAK ! THEY NOW HAVE EACH OTHER AGAIN.I CAN JUST SEE ANGIE NOW SHES LAUGHING AND HAS HER TRUE LOVE WITH HER .WE SHOULD ALL BE HAPPY FOR THEM BOTH AS I KNOW THEY BOTH HAVE NOTHING BUT ALL OF US IN THERE THOUGHT AND PRAYERS.IREMEMBER GOING TO LAUGHLIN WITH THEM AND WE HAD A GREAT TIME .RAYMOND HAD TO TAKE US ON THE TRAIN.THE TRAIN WAS HAVING TROUBLE AND I TOLD HIM HE BETTER GET UP THERE AND SHOW THE ROOKIE HOW YOU RUN A TRAIN.HE JUST LAUGHED AND SAID HE WOULD PROBABLY THROW US OFF. WHEN WE LEFT LAUGHLIN THEY WANTED TO TAKE US TO THIS OLD MINING TOWN THAT HAD STREET SHOWS AND MULES IN THE STREET.WE WERE WALKING AROUND LOOKING AT ALL THE SHOPS AND THE SHOW ON THE STREET WHEN HERE COMES ANGIE 2 BOTTLES FILLED WITH FLUID AND GOLD DUST. SHE SAID HERE I DIDNT WANT YOU 2 TO LEAVE HERE WITHOUT SOME GOLD.THAT GOLD WAS PRETTY BUT THE REAL GOLD WAS SEEING HER SMILE WHEN SHE GAVE IT TO US. THAT SMILE I WILL ALWAYS CHERRISH
LOVE YOU ALL ALWAYS
DAVID FUNK

Mary, Ray Jr., and families: Steven and I would like to express our sympathy on the death of your Dad. Uncle Ray was always very kind and pleasant to us, and we will always remember him fondly. We visited him and Aunt Angie in Kingman several times and always enjoyed their company. May God give you the consolation your need and may their souls rest in peace.
With love, Jeanie