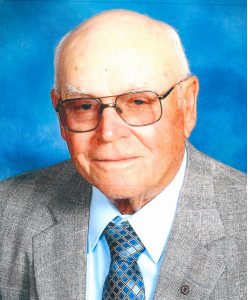 Richard J. Mahl, age 87, of Willard, passed away Tuesday, August 30, 2016 at The Willows in Willard, Ohio. He was born January 27, 1929 in Sherman Township, Ohio to the late Ralph J. and Emma (Wirth) Mahl. He was a proud U.S. Army Veteran of the Korean War and a member of the Willard Knights of Columbus. He had worked as a farmer and carpenter. Richard enjoyed woodworking and playing euchre; he belonged to a local euchre card club for over 50 years.
He is survived by three sons, James (Connie) Mahl of Oak Harbor, Gerald (Donna) Mahl of Willard and Gary Mahl of Tampa, Florida; a daughter, Jeanine (Rod) Buck of Sandusky; 7 grandchildren, Charlotte (Michael) Stonerook, Kevin (Julie) Mahl, Chad (Melissa) Mahl, Heath (Angie) Mahl, Tonya Mahl, Bryan (Mackenzie) Buck and Kristina Buck; 10 great-grandchildren; a great great grandchild; and a sister, Agnes (Joseph) Bischoff.
He was preceded in death by his wife, Velma (Trimmer) Mahl; his parents, Ralph and Emma Mahl; and a brother, Harold Mahl.
Friends may call at the Secor Funeral Home in Willard on Thursday, September 1, 2016 from 2:00 to 4:00 PM and 6:00 to 8:00 PM with a Rosary service at 8:00 PM. The Funeral Mass will be held at St. Francis Xavier Catholic Church on Friday, September 2, 2016 at 11:00 A.M. with Fr. Eric Culler officiating. Burial will follow in St. Joseph Catholic Cemetery in Willard. Memorial contributions may be made to St. Francis Xavier Catholic Church or Heartland Hospice, 907 West State Street, Suite A Fremont, Ohio 43420. Online condolences may be sent to the family at www.secorfuneralhomes.com

I work with Jeanine and I want to express my sincere condolences to all of you on the passing of your father. He was a wonderful man who will be greatly missed by all.

Gery, Donna and family, so sorry to hear about your father’s passing. May the good memories help you through this most difficult time. My thoughts and prayers are with all of you!

i work for Senior Enrichment Services and brought Richard his lunch for a few years. I am so sorry to hear of his passing. I enjoyed him immensely and loved to hear his stories of the old days. He was a great friend and man. He brightened my day.