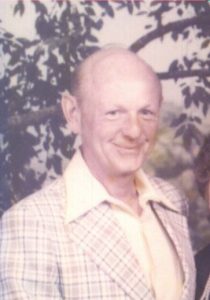 Robert L. Sell Sr., age 88, passed away on November 24, 2008 at the Willard Health Care Nursing Home. He was born on February 7, 1920 in Cumberland, MD to the late John J. and Ellen (Kesler) Sell. He was a member of the St. Francis Xavier Catholic Church in Willard and the Willard Knights of Columbus, where he was a past Grand Knight. He was president of the St. Vincent DePaul Society. He was a U.S. Navy Veteran during World War II. He was a retired terminal trainmaster at the CSX Railroad in Willard, Ohio.
He is survived by his wife, Helen ( Sutter) Sell whom he wed on February 12, 1941; 3 daughters, Mary Ann (George) Schwane of Blairsville, GA, Ginny Lee (Tom) McCarty of Orange Park, FL and Christine Sell (Jim Hilliard) of Cleveland, Ohio; 2 sons, Msgr. Robert L. Sell III of Lafayette, IN and John J. (Margaret A.) Sell of Willard; 18 grandchildren and 38 great grandchildren; 4 brothers, Sonny Sell of Green Valley, AZ, Dick Sell of Parkersburg, WV, Tommy Sell of Grand Rapids, MI, Kenny Sell of Philadelphia, PA; sister, Mary Otten of Wheeling, WV; numerous nieces and nephews.
He is preceded in death by his parents, John J. and Ellen (Kesler) Sell, 2 sons, Robert Jr. and Albert Sell; daughter, Margaret Rose Phillips; 2 brothers, Donald and John Sell; 3 sisters, Jean, Louise and Ellen (Bootie).
Friends may call on the Secor Funeral Home in Willard, Ohio on Friday, November 28, 2008, from 2-4 and 6-8 P.M. Funeral Services will be held on Saturday, November 29, 2008, at 11:00 A.M. at the St. Francis Xavier Catholic Church in Willard, with Bishop William Higi, Msgr. Robert L. Sell III and Fr. Stanley S. Szybka officiating. A graveside service will be held at a later date at the St. Joseph Catholic Cemetery in Willard. Memorial contributions may be made to the St. Vincent DePaul Society, 25 West Perry Street, Willlard, OH 44890 or to the Alzheimers Assoc., One Marion Ave., Suite 108, Mansfield, OH 44903. Online condolences may be made out to the family at www.secorfuneralhomes.com

My condolences and prayers to the Sell family. I enjoyed talking with your dad when I delivered the mail to his house on a rare occasion. I know it has to be very tough on you as my mom passed away Nov 30. May God give you comfort at this time.

To the Sell family
May God give your family comfort during this time of sorrow. We all know that Mr. Sell is with God rejoicing and celebrating with his loved ones who were waiting for him. He is singing, laughing, smiling and radiant with joy. I know how hard it is now for all of you as I lost my mom in August and God will see all of us through our loss of our loved ones. May all of your treasured memories give you comfort. We will keep you in our prayers. Mary and Darwin Weatherbie

Our prayers and sincere condolences are with the Sell family on their loss…. special intentions over these past days for Msgn. Sell, as we wish him peace & comfort for losing his Father… Peace be with each and every one of the the Sell family…

Helen and family, you have our sympathy as you grieve the loss of Bob.
He was a special man and his work with St. Vincent De Paul was outstanding.
We pray for his eternal rest and that you will all find comfort from one another.
Sincerely, Ed and Pat Sullivan

Due to Community committments in Tiffin this week end, I will not be able to attend Mr. Sell’s services. I want to give my condolences to you, his wife and family and let you know you are all in my prayers. God, give eternal rest to your servant, Mr. Sell.
Peace,
Sister Diane Hay, OSF/T

I was Bob’s Chief Clerk at Fairmont, West Virginia for a short time. He was a great Boss
and friend.