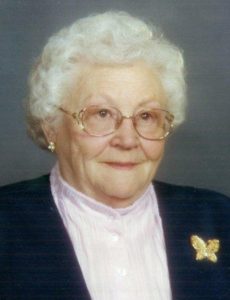 Ruby Grace Cole, age 92, of New Haven, Ohio passed away Tuesday, May 7, 2013 at the Mercy Willard Hospital in Willard, Ohio. She was born October 14, 1920 in Bowling Green, Ohio to the late Charles and Grace (Fuller) Heitchler and had been a New Haven area resident the majority of her life. Mrs. Cole was a loving and devoted homemaker, mother and grandmother giving of her time and skills to help the family. She was a member of the New Haven United Methodist Church where she had been involved in the church “Livewires.” She enjoyed crocheting afghans for her family making sure she had enough for all her grandchildren and great grandchildren for graduation. She also enjoyed gardening, cooking, weaving rugs, jigsaw puzzles and word search games.
She is survived by two daughters, Shirley Riedlinger of New Haven; and Kathryn Slessman of Willard; a son, Thomas (Sandra) Cole of Shiloh; a daughter-in-law, Betty Cole of Crestline; nine grandchildren, Connie (Dean) Albright, Carol (Collin) Garner, Cindy (Mike) Metcalfe, David (Theresa) Riedlinger, Brenda (Dan) Barnett, Pat (Mark) Pennewitt, Josh Cole, Vicki Cole, and Barb (Brett) Strine; sixteen great grandchildren, five great great grandchildren and several nieces and nephews.
She is preceded in death by her husband, Robert Cole Sr.; 3 sons, James, Michael and Robert Cole Jr.; two sons-in-law, Charles Riedlinger and Raymond Slessman; a great granddaughter, Brianna Metcalfe; her parents; three brothers and four sisters.
A graveside service will be held on Monday, May 13, 2013 at 4:00 PM in the Maple Grove Cemetery in New Haven, Ohio with Rev. James Gaston officiating. Memorial contributions may be made to New Haven United Methodist Church or the American Heart Association. Online condolences may be made to the family at www.secorfuneralhomes.com

Kathy and Family….so sorry to hear about Ruby, she was the best neighbor and will be greatly missed. Your entire family is in our thoughts and prayers.

We are so sorry for your loss. Our thoughts and prayers are with you at this most difficult time.