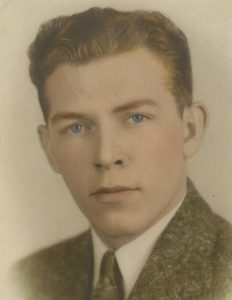 Walter L. “Dixie” “Jim” Howell
Willard, Ohio
Life is eternal, love is immortal and death is only a horizon; and a horizon is nothing save the limit of our sight. Dixie is gone from our sight, as he went to Heaven on Friday, November 15th, 2013. Born on September 15th, 1919 in Moxahala, Ohio, he was the son of Oliver and Elizabeth Howell. He was a graduate of Moxahala High School in 1938. He and his wife, Ann Storts Howell, were married in January, 1944, in McComb, Mississippi.
An avid outdoorsman, Dixie wasn’t happy if he wasn’t hunting, fishing, playing golf, or just roaming the woods, as he did as a child. In his later years, he loved to garden..especially growing tomatoes and his red geraniums & petunias…definitely blessed with a green thumb. He never knew a stranger and wasn’t happy if he couldn’t be talking to someone. As a golfer, he was club champion at the Willard Golf and Country Club and scored many holes-in-one in various states. He and his wife, Ann, managed the Willard Golf and Country Club as well. Dixie played on the varsity basketball team at Moxahala High School in 1938 when they won second place in the Perry County Basketball Tournament. He loved basketball and attended the Ohio State High School Tournaments every year until the excitement got to be too much for him. He was a 50 year member in good standing of Golden Rule Masonic Lodge 562, a past member of The Willard Conservation League, Willard Golf & Country Club, Pine Crest Golf Club in Avon Park, Fl., and The Brotherhood of Locomotive Engineers.
Dixie was an engineer on the Baltimore & Ohio, Chessie System and CSX Railroads. He was the last surviving local steam locomotive engineer and hired on in December, 1941..retiring in 1982. During that time, he also served in the U.S. Army during WWII, being discharged in January 1946 attaining the rank of Staff Sgt. He served with Co. A, 327th Infantry Div., Co. A 98th Div., Co. A 255th, 63rd Inf. Div. (Blood and Fire) as a cadreman training recruits. He served at Camp Claiborne in Louisiana, Camp Brekenridge in Kentucky, Camp Blanding in Florida and Camp Van Dorn in Mississippi. During the Great Depression, he served with the CCC’s working in forestry in the mountains near Coeur d’ Alene, Idaho.
He was preceded in death by his wife, Anna Storts Howell, his parents, brothers Edward, Oliver, Don, Clarence, Harry and Benny and sisters Lillian, Mae & Harriet.
He is survived by his daughter Carolyn Ruckman (Roger) of Mansfield; son James Gregory Howell of Brandon, Florida; grandchildren Brent Ruckman (Kristina) of Petoskey, Michigan, Kristin Brake of Mansfield, Jason Ruckman of Columbus, Jennifer Burkhart of Mansfield, Jeremy Howell (Amy) of Shiloh, and Jay Howell of Brandon, Florida; 12 great grandchildren; brothers and sisters-in-law Rod Storts (Ima) of Plant City, Fl., Charles Storts (Jo) of Willard, Ruth Hoops of New Lexington, Oh, Claire LaTour of Westerville, Oh, Betty Clark of Lancaster, Oh, Rose Storts of W. Melbourne, Fl., and numerous nieces and nephews.
Into the arms of angels goes his peaceful, loving soul.
A graveside service will be held at 11:00 Friday, November 22, 2013 at Maple Grove Cemetery, New Haven, Oh. Pastor Steve Anderson of Grace United Methodist Church officiating.
Memorial contributions may be made to St. Jude Hospital for Children, Memphis, Tn. or Smile Train.

Carolyn & Greg… So sorry to read about your Father. He was a joy to be around.. A true Gentlemen , he will be missed.

Stan and I both have wonderful memories of him.He was a very good person and will be fondly remembered. dR7ab

Greg and family – so sorry to read about the loss of your Dad. Will keep you in my thoughts and prayers.

To Carolyn and family – the Class of 61 sends our heartfelt sympathy to your entire family in the loss of your loved one. It is never easy losing a parent regardless of age or health. May you know that you are in our thoughts and prayers during this time.