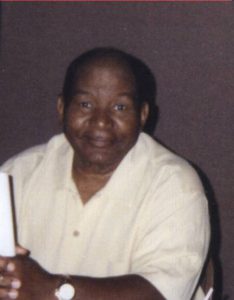 A.B. Scott was born November 13, 1933 in Huntsville, Alabama to the parents of Sam and Minnie Scott. He was raised in Mansfield, Ohio and resided in Willard, Ohio for the remainder of his life.
A.B. was a retiree of the Ohio Brass Company in which he served 38 years.
He was known for his great sense of humor, positive attitude and dedication to his family and friends. He enjoyed helping others and was a big fan of professional wrestling and old western movies.
He was also a member of First Baptist Church of Willard.
It was a blessing and an honor to be in his presence.
A.B. was called home on Sunday, July 8th, 2007.
He was preceded in death by his father Sam Scott Sr., sister Mable Scott, brothers Robert Scott and Wayman Scott.
He is survived by his loving wife Doris Scott of 37 years, mother Minnie Scott, brothers and sisters, Carrie Scott Scruggs, Sam Scott Jr. (wife Toni Scott), Jessie Mae Scott, Harold Scott (wife Marilyn Scott) and Lucille Edwards all of Mansfield.
Thirteen children, Aaron Scott, of Steubenville, Bryant Scott, of Columbus, Netta Scott, of Mansfield , Lisha Scott (Lammon Douglas), of Willard, Timothy Scott (wife Shawanna Scott), of Crestline, David Scott, of Willard, Thelma Dickerson and Tonya Scott of Columbus, Yvonne Barrison (husband Charles Barrison), Robert Harris and Deborah Harris, of Willard, Sabrina Harris and Robin Harris, of Columbus and a host of grandchildren, great grandchildren; nieces and nephews, cousins.
Please join us in celebration of his life and laughter. His laughter is how he would want his home going to be.
Visitation will be Friday from 5-8 P.M. at the Secor Funeral Home in Willard, where the funeral service will be Sat., July 14, 2007 at 2:00 P.M., with Rev. Jeffrey Jones officiating, associate pastor Sherry Patterson speaking and his sister, Mae Scott having a dedication . Burial will follow at the Greenwood Cemetery in Willard. Memorial contributions may be made to the family. Online condolences may be made to the family at www.secorfuneralhome.com.