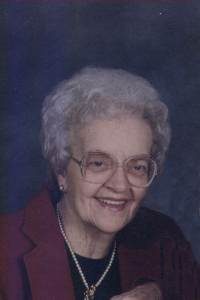 Arleen J. Hammond, age 77, resident of Willard, passed away on Monday, February 11, 2008 in Willard Mercy Hospital. She was born on May 20, 1930 in Willard, Ohio to the late Willard and Ethel (Lepard) Moore and had been a resident of Willard all of her life. She graduated from Willard High School in 1948. She was a member of the First United Methodist Church in Willard. Mrs. Hammond retired as a distributor from the Cleveland Plain Dealer. She enjoyed her dog and most of all, spending time with her family.
She is survived by her son and daughter-in-law, Dennis R. and Deb Hammond of Willard; daughter and son-in-law, Penny R. and David Sullivan of Hilliard, Ohio; three grandchildren, David, Daniel and Melissa Hammond all of Willard; a great granddaughter, Emily Hammond of Willard; a sister, Elaine Jones of Columbus, Ohio; Furry Companion, Sammy; and several nieces and nephews.
She is preceded in death by her husband of 51 years, Raymond Hammond; her parents; and an infant twin sister, Eileen Moore.
Friends may call at the Secor Funeral Home in Willard on Thursday, February 14, 2008 from 5:00 – 8:00 PM. Funeral services will be held at the funeral home on Friday, February 15, 2008 at 11:00 AM with Rev. Ken Gifford officiating. Burial will follow in Attica Venice Cemetery in Attica, Ohio. Memorial expressions may be made to American Cancer Society, Willard Mercy Hospital or to the donor’s choice. Online condolences may be made to the family at www.secorfuneralhomes.com

Penny and Family,
Deepest sympathy to you and your family in the passing of your mom. She was always a nice lady. May your memories of her comfort you.
Cindy Bevier Trimner

Penny and Family,
My deepest sympathy on the loss of your mother. My thoughts and prayers are with you.
Carolyn Knoll Smith

Melissa, I am sorry to hear about the loss of your Grandma. I’ll be thinking of you.