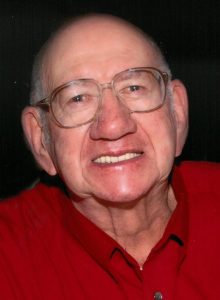 Carl E. Funk, age 87 of Willard, passed away at his home on Thursday, August 29th, 2013. He was born January 10, 1926 in Sullivan, Ohio to the late Albert and Ruth Funk (Ross-Holmes). He attended North Fairfield High School and was drafted to the Navy in 1944. He served in the U.S. Navy in World War II from 1944 to 1946 and was a member of the North Fairfield American Legion. Carl was a lifelong farmer and enjoyed planting crops and caring for livestock. He also had worked at Westinghouse early in life and retired from Midwest Industries with 27 years of service in 1991. Carl enjoyed playing euchre, watching sports and being with his family, especially his grandchildren. He is well known for being the “chief cook” while camping.
He is survived by his wife, Myrtle “Sis” (Reel) Funk, whom he married November 5, 1955; daughter Ruth Ann Stover of Willard, Eric (Gidget) Funk of Grant City, Missouri, Heidi (Rich) Benich of Plymouth, and Nancy (Rico) Morales of Lancaster and six grandchildren, Justin Burch, Danielle Funk, Evan Funk, Annette Benich, Nathan Benich, Andrew Morales and Olivia Morales and three brothers Dean Funk of California, Dale (Mary) Funk of Arizona, Norman Funk of Georgia, sister-in-laws Lelia Funk, Margaret Funk, Virginia Reel and Georgia (Reel) Kereluik; several nieces and nephews.
In addition to his parents he is preceded in death by his brother Emmons Funk, James Funk, brother-in-laws Harry Kereluik and Charles Reel Jr., sister-in-law Patricia Funk and son-in- law Alan Stover in 2012.
Friends may call on Monday September 2, 2013 from 5:00 to 8:00 PM at the Secor Funeral Home in Willard, Ohio. A private memorial service for the family and military rites will be held at the farm north of Willard on Tuesday afternoon. Memorial expressions can be made in lieu of flowers to the 4-H Camp Conger or the donor’s choice. Online condolences may be made to the family at www.secorfuneralhomes.com

Myrtle and families,
Mike and I were sorry to hear about the passing of your husband and father. He was always very nice to us when we would see you in passing Just know that he has gone home now in peace and that will fill your hearts that he is in peace until you all see him again. All our prayers are with you all. Love Mike and Melodie Adelman

Our hearts and prayers go out to all the Funk family. What a beautiful legacy he has left in his family. May your wonderful memories be a comfort to you all. God Bless.

My condolences to the entire Funk Family. I am sorry to hear of Carl’s passing.

Our condolences to Sis and the rest of the Funk family. We will miss his zest for life and great sense of humor.

We want to extend our deepest sympathies to Eric and his family at this time of loss. May God give you peace and comfort at this time, and in the days ahead.

So sad to hear of the passing of such a fine man. I will always have wonderful memories of Carl working with him here at MTD. May the Lord comfort the entire family in this time of loss and sadness.

Don and I would like to extend our deepest sympathy to the entire Funk family. Carl was a very loved man by his family and friends. He will be deeply missed.