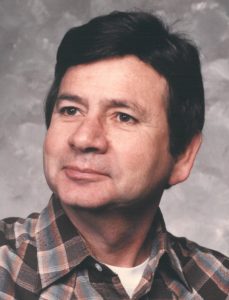 Jose P. “Joe” Villareal Jr., age 76, resident of Willard, Ohio passed away on Tuesday, August 27, 2013 at Hillside Acres Nursing Home in Willard. He was born on May 5, 1937 in San Antonio, Texas. He moved to Ohio in 1959 and lived in the Oleno and North Fairfield area since 1966, coming from Willard. He worked as an auto body technician for 43 years, 10 of those years in Willard, 1 in Sandusky, and the last 32 years in Norwalk for Bob Meyer, Carl Kenney, Phil Steinle and Kasper’s Auto Group. He retired in 2002. He was a member of the Nowalk Eagles Arie 711. He enjoyed dancing and country music.
He is survived by his son and daughter-in-law, Joe and Noemi Villareal of Willard; step daughter and son-in-law, Thomasene and Chuck Scott of Greenwich; and daughter, Cruz Villareal of Atlanta, Georgia; three grandchildren; seven step grandchildren; sister, Lucy Garza of San Antonio, Texas; and two brothers, Ray Villareal of Galion, and Adolfo (Lydia) Villareal of San Antonio, Texas.
He is preceded in death by his wife, Shirley Villareal in 1990; an infant son; and parents, Jose and Cruz (Pena) Villareal.
Friends may call on Friday, August 30, 2013 from 1:00 to 2:00 P.M. at the Secor Funeral Home in Willard, where the funeral service will be held on Friday at 2:00 P.M. Burial will follow at the North Fairfield Cemetery in North Fairfield, Ohio. Memorial contributions can be made to the American Cancer Society. Online condolences can be left for the family at www.secorfuneralhomes.com.

Our deepest sympathy at the loss of your dad. He was a great man.

Joe and Noemi – My condolences for your lost and my prayers for your comfort. Take Care. Patti

Joe and Noemi- My condolences to you in the loss of your dad. You are in my prayers.