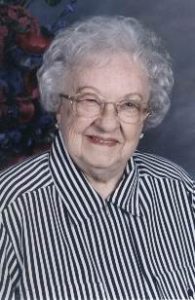 Catherine F. “Kate” Rice, age 89, resident of Willard, passed away on Friday September 28, 2007 in Willard Mercy Hospital. She was born on January 23, 1918 in Stroudsburg, Pennsylvania to the late Elmer and Virgie (Albertson) Fleming and has been a resident of Willard for the passed 17 years. She was a graduate of Stroudsburg High School and was employed as a bookkeeper for the Pocono Record. Mrs. Rice was a member of the Stroudsburg Presbyterian Church and attended the First United Methodist Church in Willard. She was a member of the Embroidery Guild of America, the Willard Research Club and the Willard Historical Society.
She is survived by two daughters and sons-in-law, Patricia and James Snyder of Stanley, NC; Rhonda and George Rohaly of Willard; three grandsons, Christopher Snyder; Kevin Snyder and Eric Rohaly; five great grandchildren; one great great granddaughter; a brother, Carl Fleming of Easton, PA.
She is preceded in death by her first husband, Stewart Ace; and her second husband, Carl Rice.
Friends may call at the Secor Funeral Home in Willard on Tuesday, October 2, 2007 from 2:00 to 4:00 PM where the funeral services will be held at 4:00 PM with Reverend Ken Gifford officiating. Burial will follow at a later date in Pennsylvania. Memorial expressions may be made to American Heart Association. Online condolences may be made to the family at www.secorfuneralhome.com