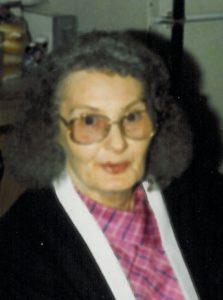 Edna Mae Puckett, age 89, resident of Willard, passed away on Wednesday, September 16, 2009 in Mansfield. She was born on Janurary 28, 1920 to the late Henry and Bessie Lee (Burchett) Rivers and had been a resident of Willard most of her life.
She is survived by one daughter, Bobbie (David) Amburgy of Greenwich; one son-in-law, George Adams of Plymouth; five grandchildren, Michelle Amburgy of Greenwich, Melinda (Doug) Hulcy of Ashland, Jim (Cecila) Adams, Mark (Sharon) Adams and John (Kelli) Adams, all of Plymouth; 12 great-grandchildren.
In addition to her parents she was preceded in death by one daughter, Ida Adams; one son, Clarence Puckett and one infant son.
Friends may call at the Secor Funeral Home in Willard on Saturday, September 19, 2009 from 11am until 1pm. Funeral services will begin at the funeral home at 1pm. Online condolences may be left for the family at www.secorfuneralhomes.com