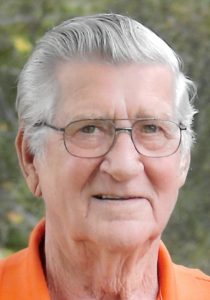 Edwin C. “Curt” Mason, Jr., age 82, resident of New Washington, Ohio passed away on Sunday, December 3, 2017 at his home surrounded by his family. He was born on January 16, 1935 to the late Edwin Sr. and Minnie (Tyler) Mason and had been a resident of New Washington since 1948. Mr. Mason had served in Ohio National Guard. He was a truck driver for Propane Transport Inc. in Findlay for 15 years, where he had 2 million safe miles and then retired from Crest Bending in New Washington in 2002. He was a member of the St. Bernard Catholic Church and the Knights of Columbus.
He is survived by his wife, Bertha O. (Stockmaster) Mason whom he wed on October 8, 1960; three daughters, Julie (Rod) Nutter of Chesapeake, VA, Karen (Aaron) Kohlhorst of Ontario, and Laura (Don) Metzger of Shelby; four sons, Chuck Mason of New Washington, James (Francine) Mason of San Jose, CA, Terry (Kristie) Mason of New Washington and Mike Mason (Heather Endicott) of Savannah, OH; 17 grandchildren and 6 great grandchildren; and 2 sisters, Ethel Bennett of Roxton, TX, and Dolores Studer of New Washington.
In addition to his parents he is preceded in death by two infant brothers, Charles and Robert Mason, a brother, Roy Mason; and a sister, Evelyn Schlarb.
Visitation will be held at the Secor Funeral Home in New Washington, Ohio on Tuesday, December 5, 2017 from 4:00 to 8:00 PM. Funeral Mass will celebrated on Wednesday at 11:00 AM at the St. Bernard Catholic Church with Father George Mahas officiating. Burial will follow in St. Bernard Catholic Cemetery in New Washington. Memorial contributions can be made to St. Bernard School Endowment Fund or the American Cancer Society. Online condolences can be made at www.secorfuneralhomes.com

Our sincere sympathy goes out to all the Mason Family. You are in our prayers.

Oh the memories and laughter we shared with Uncle Curt. From my younger days of him carrying me upside down & attempting to put my pony tail in the pile of horse poop. His joking about Jeff’s long hair & blue tinted glasses. More than anything I will miss his early arrival to the Mason reunion to lend a hand in set up. I always dubbed him as the “ornery” uncle and will greatly miss his laugh. Condolences to all of you.

Praying for your family at this time.

Dear Bert & family.
You have my sincerest condolences at the loss of Curt. I have many fond memories of times spent at your place with your kids and the other neighborhood kids while growing up in “good times!”
You and Curt where, like so many of the other adults around us, like extended parents. You looked after us as though we were your own.
I’ll never forget my childhood in that part of town nor will I forget Curt and other “fathers” that looked after us and protected us.
May his soul rest in eternal peace.