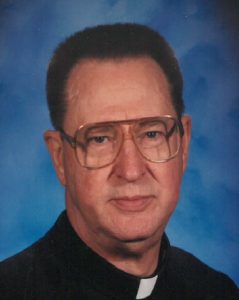 Father Robert J. Weithman, priest with Diocese of Toledo, Ohio age 85, passed away on Tuesday, October 14, 2014, at his home in Fremont, Ohio.
The son of George and Clotilda (Alt) Weithman, he was born on February 24, 1929 in New Washington. He has three brothers, Alfred (Dorothy) Weithman of New Washington, Michael (Patsie) Weithman of Chatfield and Allan (Bonnie) Weithman of Punta Gorda, Fla. His brother George Jr. lost his life in World War II. He has 14 nieces and nephew and 35 grandnieces and nephews.
After attending St. Bernard grade school, he studied for six years at St. Fidelis Seminary in Butler, Pa., philosophy for two years at St. Meinrad Seminary, St. Meinrad, Ind., and four years of theology at Mount St. Mary’s Seminary, Cincinnati.
On May 28, 1955 he was ordained as a priest at Rosary Cathedral, Toledo, by Bishop George J. Rehring. Father’s first assignment was associate pastor at Toledo Rosary Cathedral from 1955 to 1968. From there he was transferred to Mansfield St. Peter from 1968 to 1969. In 1969, he became pastor and had the honor of starting the new parish, Lexington Resurrection, remaining there until 1981. Father was then transferred to Bellevue Immaculate Conception where he was pastor from 1981 to 1992.
His last assignment as pastor was at Fremont St. Casimir where he served faithfully until retiring in 2005 when the parish was closed. Father’s guidance in the closing of St. Casimir Parish has brought many blessings to the Fremont Catholic Community through the St. Casimir Foundation which he established. In his retirement he remained very active serving as Chaplain at the Commons of Providence Retirement Center in Sandusky, Ohio where he lived until just recently. Thou art a Priest Forever.
Vespers for the Dead will begin at 4:00 pm with visitation following until 8 pm Thursday, October 16, 2014 at St. Bernard’s Church on 320 W. Mansfield Street in New Washington, Ohio. Mass will be celebrated at 11:00 am on Friday, October 17, 2014 at St. Bernard’s. Memorial contributions may be made to St. Bernard’s Church. Father Weithman will be missed by countless people, who benefited from his sermons, his wisdom in the confessional, and his faith. Online condolences may be made to the family at www.secorfuneralhomes.com.

Alfred and family;
So sorry to learn of Bob’s passing. You have our most profound sympathy.
Darl and Diane and family

I served as principal at Immaculate Conception, Bellevue under Fr. Weithman’s guidance for 6 years. He was a good and holy priest. He was very supportive of me and a pillar of passing on the faith to the school children.
I will always be grateful for the time he came to anoint my mother when he was stationed as pastor in Fremont. He was a blessing for my mother and family.
My sympathy to his family, friends, and all who loved him. May he rest in peace.

Dear Cousins and your families, sorry to receive word of Father Bob’s passing, what a great loss, know that our prayers and sympathy are with you at this time. Ed and I are wintering in Florida and unable to be in Ohio at this time. June and Ed Swope, Aunt Agnes’s daughter.

We all loved Fr. Whitman . He was the Founder of Resurrection Parish . A good Priest, a fin example for us to follow . We enjoyed his visite tremendously , he will never be forgotten . May he Rest in Peace now. As one of my children said : he had a first Classe Ticket to Heaven . The Familly Pentz , Betty Beck and Florence Berhard . All from Resurrection Parih Lexington Oh.

Fr Weithman was very special to our family. His years at Bellevue were filled with faithful leadership to the parish. His devotion to God and our Blessed Mother was inspiring. Our children enjoyed greatly his visits, his stories and his caring ways.
Our sympathy to all who loved him.
Godspeed, good and faithful servant. May you rest in His loving presence forever. No more pain. No more tears. Life eternal in Paradise.
We will miss you greatly.

Fr. Weithman was a wonderful priest whose spiritual guidance has continued to inspire me along my Faith journey. I feel blessed that he was pastor in Bellevue while my children were attending Immaculate Conception School. He will be missed but I know he will rest in peace with the risen Christ. My deepest sympathy to those who loved him. Sincerely, Grace Middleswarth