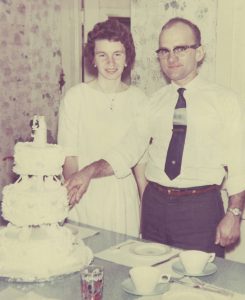 Francis Anthony Welch, age 78, beloved husband and father, passed away on Saturday, June 26, 2010. He had been living with end-stage Alzheimer’s disease at Hillside Acres Nursing Home in Willard, Ohio since March of 2009. He was born on March 10, 1932 in Barberton, Ohio to the late Clyde and Ethel (Nahacky) Welch. He had been a resident of Sullivan, Ohio in his school age years and then moved to New London in 1962 where he resided with his wife Regina and raised their two daughters. He moved to Plymouth in 1995. He worked for the American Sword Company in New London and some of his favorite pastimes were reading, watching the Cleveland Indians, traveling with the family, playing his guitar, and scuba diving in his younger years.
Francis was preceded in death by his wife Regina, his parents, and his only brother, David Welch (wife Patsy) of Moscow, Idaho. He is survived by his two daughters, Kelly Lyn Solitaria (husband Gil) of North Olmsted, Ohio and Peggy Sue Welch-Olalde of Willard, Ohio. Francis was adored by his six grandchildren; Joshua, Samantha, Ashley, Summer, Sawyer, and Spencer. He also had one great-grandchild, Corie. He also is survived by an extensive number of nieces, nephews, cousins, sisters and brothers-in law, and three aunts who loved and cared for him deeply.
Friends may call at the Secor Funeral Home in Plymouth on Monday, June 28, 2010 from 6-9 P.M. Funeral services will also be held at the funeral home on Tuesday, June 29, 2010 at 11:00 A.M. with Allen Hale, Elder of Fitchville Church of Christ officiating. Burial will follow at the Maple Grove Cemetery in New Haven, Ohio. Online condolences may be made to the family at www.secorfuneralhomes.com