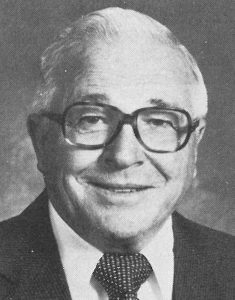 Frank L. Chapman, age 95, of Willard, Ohio passed away on December 12, 2013 at the Willows of Willard. He was born on January 9, 1918 to the late Richard and Pearl (Woodworth) Chapman and graduated from New Haven High School in 1936. Frank served in the U.S. Army Air Corps during World War II from 1942-1945.
Frank was a graduate of Boeing School of Aeronautics and served in South Pacific, New Guinea and Tokyo, Japan. He served 35 year with the Willard United Bank and Toledo Trustcorp. He started his banking career Dec. 1945 and held various positions and served as President his last eight years before retiring in 1981. He was a graduate of Wisconsin School of Banking and served on several banking boards and committees in the county, state and national level. He was an active 4H member for eight years and leader for several years and announced Saddle Club shows for 35 years. Frank was one of few Ohioans to receive the 4H State Alumni Recognition Award from 1998. He received three 4H State Awards, Huron Co. 4H, Governor Taft’s State Reorganization Award for 4H and State Outstanding Fair Supporter of 2004. He was active in professional, agricultural, civic and charitable organizations throughout his adult life. January 1981 he received Citizen of the Year Award from the Willard Jaycees. His hobby was woodworking specializing in making canes and fancy bowls and growing tomatoes
Frank was a member of Grace United Methodist Church, Willard Rotary Club (Paul Harris Recipient), 60 year membership of Masonic Lodge, Free and Accepted Masons, Golden Rule Chapter 167 and American Legion (Buchingham Dermer Post No. 514.).
Survivors include his wife, Ruth, two daughters, Sandra K. Viers of Oldsmar, FL; and Jude Chapman of Willard; son and daughter-in-law, Thomas A. and Mary Ellen Chapman of Willard; four grandchildren, Belinda Viers of Oldsmar, FL, Michael Immon of Willard, Mark (Haley) Inmon of Bullhead City, AZ; and step grandson, Paul (Valerie) Adams of Columbus and great granddaughters Mya Dawn Inmon and Paisley Lane Adams.
He is preceded in death by his parents, Richard and Pearl (Woodworth) Chapman; six sisters, Evelyn (Walter) Buchanan, Mary (Ted) Close, Jessie (Frank) Schoen, Florence (Joe) Rosenbury, Cora (Edward) Postema and Jeanette (Gene) Buchanan; and two brothers, Henry and Donald Chapman and six nieces and nephews.
Friends may call at the Secor Funeral Home in Willard, Ohio on Sunday, December 15, 2013 from 3:00 to 7:00 PM. Funeral services will be held at the Grace United Methodist Church in Willard, Ohio at 11:00 AM on Monday with Reverend Doug Winner and Reverend Steve Anderson officiating. Burial will follow in Maple Grove Cemetery in New Haven, Ohio. In lieu of flowers memorial contributions can be made to 4H Camp Conger , Stein Hospice, or to the church of your choice to benefit the youth program. Online condolences can be made at www.secorfuneralhomes.com.

Our condolences to the family. Frank was very
good to Dick and I and we so appreciated both his
support and friendship. Also a special prayer for
Mark as Mark and Brett have been friends for many
years and know how deeply this loss means to him.
Frank will be missed by all who knew him. May he rest in peace.

to our long time friends and family,we off our thoughts and prayers.when I think of frank I know how much he did for this community and surrounding towns also.he was a great man.he will be sadly missed.

So sorry to hear of franks passing.He was such o great friend of mine and Roger.They always enjoyed each others company and had many talks about business and sometimes even farming. he will be greatly missed. Arlene and family.

Ruth and Family; Prayers for peace to bring comfort and courage to face the days ahead. Keep the memories to hold forever in your heart.

The world has lost a wonderful man but god has gained an angel. Frank was a dear man who was a very close friend of my grandfathers. The stories these 2 told over the years are ones I will remember forever. Rest in peace Frank. Your work here on earth is done. May you and Grandpa have a great time together once again. God Bless you.

Please accept my condolences on the passing of Mr. Chapman.He was a friend of my late husband and myself. He was a very fine man.He shared his tomato seeds with us from time to time and we surely enjoyed them as well as his friendship .May God give you strength in knowing that he is in a loving peacefull place.

Frank was a delightful man, full of energy, compassion, enthusiasm and great insight. Certainly he touched many people throughout the community of Willard in a positive way. He will be greatly missed. May God bless his family. We are all better off having known him.

Judy, Michael, Mark and Ruth,
We are so sorry for your loss. Frank was a special man whose smile was an outward sign of a kind and loving person? Please know we are thinking of you all at this time. All the good that he did for Willard and for all who knew him will remain his legacy.May he rest in peace.

Our condolences to the Chapman family upon Frank’s passing. He was such a kind man, who always had a smile for everybody. Our thoughts and prayers are with you at this difficult time.
God Bless and comfort you.
Dennis and Cynthia Branham,
Summertown, TN

A very good friend of my Father and myself. A wonderful man who will be missed by his family and all who knew him.Peggy and I offer our condolences and prayers for the family.