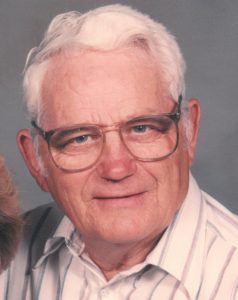 Frederick F. “Fred” Sowders, age 86, resident of Rome, Ohio passed away on Thursday, August 3, 2017 at his home. He was born on November 28, 1930 in Mount Clemens, Michigan to the late George and Hilma (Griebe) Sowders. Fred was a carpenter and roofer, who had built three family homes. He was a member of the LifePoint Community Church in Plymouth and enjoyed fishing, hunting, traveling with his wife to all but eight US state and the Holy Land, as well. Fred was best known as a friendly and happy go lucky fellow.
He is survived by wife, Norma S. (Alfrey) Sowders, whom he married on October 16, 1976; two daughters, Sheryl Garrett, Theresa Hudgens; three sons, John, Fred Jr., and Dennis Sowders; four grandchildren, Ben (Ariel) Garrett, Shane Garrett, Angela (Martin) Bowen and Thomas Bradford; three great grandchildren, Hunter, Peyton, and Reagan Garrett; three brothers, Gilbert (Pam) Sowders, Leonard Sowders, and Lavern Sowders; his dog, Brandi; and numerous nieces and nephews.
In addition to his parents, he is preceded in death by a son, James Sowders; a son-in-law, John Garrett, Jr.; two sisters, Irene Ziegler, and Georgia Keiser; and a brother, Robert Sowders.
Visitation will be held at the Secor Funeral Home in Plymouth, Ohio on Sunday, August 6, 2017 from 2:00 to 5:00 PM, where the funeral service will be held on Monday at 11:00 AM with Rev. Rich Hurles officiating. Burial will follow in Mt. Hope Cemetery in Shiloh, Ohio. Memorial contributions may be made to Ohio Health Hospice or LifePoint Community Church. Online condolences can be made at www.secorfuneralhomes.com

To the family: Your husband, father and grandfather was always a joy to be around. He was full of life, love, joy and laughter. He was loved and will be missed by many people. Our prayer is, may God comfort your hearts and give you peace during this difficult time.