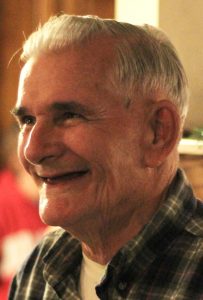 Thomas A. McCarthy, Sr., age 76, resident of New Washington, Ohio, passed away on Sunday, July 30, 2017 at the Willard Mercy Hospital. He was born on April 4, 1941 to the late Anthony Joseph and Mary Inez (Fetzer) McCarthy and had been a lifelong area resident. Tom was a 1959 graduate of New Washington High School and was retired from Thermo Disc in Mansfield. He was a member of the St. Bernard Catholic Church in New Washington. He loved spending time around a fire with family and enjoyed many hobbies including restoring garden tractors, gardening, hunting fishing and camping.
He is survived by his wife, Mary R. (Grubaugh) McCarthy, whom he married on September 14, 1963; four children, Thomas Jr. (Donna) McCarthy of Norfolk, VA, Christine (Mitch) Standard of Macomb, IL, Michael (Cindy) McCarthy of New Washington, and Terrie (Brett) Hall of San Diego, CA; eleven grandchildren; two great grandchildren; a brother, Jack (Linda) McCarthy of Tiro; four sisters, Mary Ann (Dick) Painter of Fostoria, Joan (Wayne) Ziegman of Fostoria, Judy Shell of New Washington, and Eileen (Gary) Utiss of Willard; a sister-in-law, Eyleen McCarthy of New Washington; and many nieces and nephews.
In addition to his parents, he is preceded in death by a daughter, Karen McCarthy; a sister, Margaret Folgeson; and a brother Joe McCarthy.
Visitation will be held at the Secor Funeral Home in New Washington on Thursday, August 3, 2017 from 4:00 – 7:00 PM. Funeral Mass will be celebrated at St. Bernard Catholic Church in New Washington on Friday, August 4, 2017 at 11:00 AM with Father George Mahas officiating. Memorial contributions can be made to the American Heart Association. Online condolences may be expressed to the family by visiting www.secorfuneralhomes.com

Tommy was one of my best friends at St. Bernard’s, before I moved to Galion, in 51. I haven’t spoken with him much since. He was a great friend and I’m sure his nature carried on through his life.
You have my deepest sympathies. God Bless you.

My condolences to you and your family. My sister, Vickie, speaks highly of Tom and his family.
May God Grace you with peace and love eternally.

My sincerest condolences for your entire family over your loss. Praying for all of you.

We are so sorry to hear of the loss of your husband, dad, grandfather and brother. You are all in our prayers.

We are so sorry to hear about Tom’s passing. Whenever I would see him, he had a smile on his face. I know how much he loved his family. I know you will all miss him dearly. Praying for comfort during this difficult time. Rest in peace Tom.

My sincere condolences in the loss of your Dad/Husband/Grandfather. Sending all of you hugs and prayers. Love all of you!