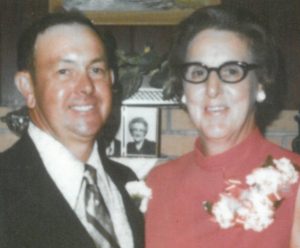 Winter is the period of rest and rejuvenation…a time to prepare for the rebirth of spring…a time known well to any farmer. Such is this time for Harry R. Ferguson who passed early on February 9, 2014 at the Willows in Willard following an extended illness. Harry has now joined his beloved Dorothy for that well deserved rest and everlasting life with God.
Harry R. Ferguson 91 was born on October 25, 1922 in Cranberry Township, Crawford County to Eugene and Mary Matilda Laux Ferguson. On September 17, 1939 he met Dorothy Gundrum the love of his life. They were married on August 28, 1942 in Defiance Ohio. In 1948 they bought what would become Forgotten Acres Christmas-Tree Farm near Shelby. Together they developed and operated a Christmas Tree business for almost 50 years. Harry also retired from Ohio Seamless Tube (Arcelor Mittal) in 1978.
Harry is survived by his daughter, Susan Taylor, of Shiloh; son John Robert (Dolly) Ferguson; grandson John Robert (Sanjo) Ferguson III; and great-grandson John Robert Ferguson IV all of Shelby. He is also survived by a sister-in-law, Evelyn Gundrum of Shelby, numerous nieces and nephews, and close friend Mike Nickels.
In addition to Dorothy and his parents, Harry is preceded in death by his father and mother-in-law, Perry and Elva Quig Gundrum, sisters and brothers in law: Caroline and Maurice Lash, Elsie and John Willie, Mary and Michael Staiger; brothers John R Ferguson, Eldon and Eugene Ferguson; brothers and sisters-in law Arthur and Helen Ferguson; sister-in-law, Ruth Gundrum Bell; brothers-in-law: Junior Perry Gundrum and John Gundrum; sisters-in-law and brothers-in law: Estelle and Carl Tredway, Paul and Lucille Gundrum, James and Mildred Gundrum, Robert and Genevieve Gundrum.
Funeral services will be at Secor Funeral Home in Plymouth on February 12, 2014. Visitation will be 9:00-11:00 with the service to follow at 11:00. The service will be officiated by Sister Diane Hay. Burial will be in Mt Hope Cemetery, Shiloh.
Donations may be made to Mercy Willard Hospital Chaplain Services, the Shiloh-Cass-Bloomingrove Emergency Serivces, or Mt Hope Lutheran Church, Shiloh.

I am so sorry to hear of the passing of Harry. I became very fond of him during his stay at the hospital. I enjoyed taking care of him and listening to his stories. He was a very devoted man and great person. He is finally at peace with Dorothy! Sending you all strength, courage, and prayers! RIP Harry!
Krista Sowers

Susan I was so sorry to hear of your dads death. I feel honored to have met him and you while in Mercy. And will always remember him frosting Christmas cookies with you. Please except my condolences.

Sorry to hear about your loss.. The only comfort we get in these times is the fact that someday we will see them again..I know how hard it is, but with time and God’s grace, you will prevail..

Sorry to hear of your loss. Harry was a true friend and caretaker of the land. I worked for Harry and Dorothy for some time and enjoyed the potato soup and stories that Harry told. They are together again….

John, Dolly and family,
We are very sorry to hear of your loss. We won’t be able to make calling hours, but want you to know we will be praying for you and your family during this difficult time. The God of peace will bring comfort. We are here if we can help in any way.
Jeff and Brenda

What a beautiful tribute to your beautiful parents, Susan. Our hearts and prayers will be with you and your family at this difficult time. God bless you all, now and always! Bob and Gretchen

My thoughts and prayers are with you during this time of your loss. Harry was a special person who I enjoyed visiting when he was in Willard Mercy.
In God’s Love,

So sorry to hear of your dad’s passing. Harry and Dorothy were good friends. Take comfort to know they are now reunited.