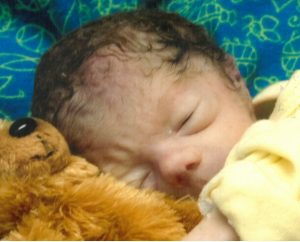 Jeremiah Glenn Lengyel was born into heaven on Tuesday, December 15, 2015 with the help from Akron General Hospital in Akron, Ohio.
He is survived by his mother, Hannah M. Lengyel; grandmother, Tammy Robinson and Steve Harper of Willard; grandfather, Karl Lengyel of Willard; 3 aunts, Kaylah Luman, Samarah Robinson and Presley Robinson all of Willard; uncle, Wyatt Lengyel of Willard; great Grandparents, Karl (Mary) Lengyel of Plymouth, Pauline Lengyel of Willard, Mary (Bobby) Bowman of Somerset, KY and Anita Meade of Wakeman; cousin, Brayden Hunt of Willard.
He is preceded in death by his great grandfather, Glenn Meade.
There will be calling hours on Tuesday, December 22, 2015 from 4:00 to 6:00 P.M. at the Secor Funeral Home in Willard, Ohio where there will be a Memorial Service at 6:00 P.M. with Andy Gibson officiating.

My prayers of support are with you at this time. May God bless you in all the ways you need most.

Hannah, I am so sorry for your loss. May you sense the prayers of those who care. May God heal your broken heart. Your little one lives and is running and laughing on the streets of Heaven. Until you see him again you will forever hold him in your heart.

We are so sorry for your loss ? He’s beautiful! Hugs and prayers!!