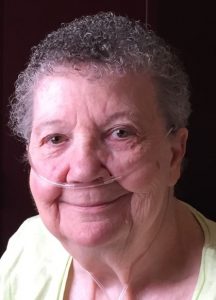 Kathryn E. Shoup, age 85, resident of Willard, Ohio passed away on Wednesday, July 13, 2016 at the Willows at Willard Care Center. She was born on August 11, 1930 in Marion, Ohio to the late Carl and Edna (Tobey) Seiter and had been a Willard resident the majority of her life. Mrs. Shoup had been employed as a waitress at the former Hartenstein’s Restaurant, and later a nurse’s aid with the former Quality Care Nursing Home. She was a member of the Trinity Lutheran Church in Willard. Mrs. Shoup enjoyed playing bingo, puzzles, bowling and spending time with her grandchildren and great grandchildren.
She is survived by a son, R. Douglas Hillis of Fremont; two daughters, Beverly (Michael) Baylor of Willard; and Connie (Frank) Gearheart of Willard; five grandchildren, Stephanie (Jeff) Lippert, Adrienne (Mike) LaBarge, Andrew (Avalon) Baylor, David (Kelsey) Eldridge, and Steven Eldridge; ten great grandchildren; a sister, Frances Mahaffey of Marion; and several nieces and nephews.
In addition to her parents she is preceded in death by her husband, Lloyd A. Shoup in 2000; an infant son, James Hillis; and two brothers, Paul and Donald Seiter.
Friends may call at the Secor Funeral Home in Willard, Ohio on Friday, July 15, 2016 from 2:00 to 3:00 PM where the funeral service will be held at 3:00 PM with Reverend Janet Wittenmyer officiating. Burial will follow in Trinity Lutheran Cemetery in Willard. Memorial contributions can be made to the American Cancer Society. Online condolences can be made at www.secorfuneralhomes.com