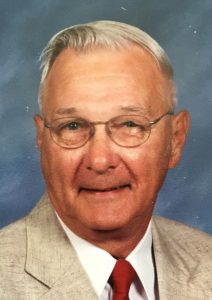 Kenneth R. Osborn, age 80, resident of North Fairfield, Ohio passed away from this life and went to be with his Lord and Savior on Monday, June 12, 2017 at his home surrounded by his family. He was born on March 12, 1937 in Willard, Ohio to the late Corwin and Berniece (Burr) Osborn and had been a lifelong area resident. Mr. Osborn was a graduate of Milan High School and then served in the US Army during the Cold War Era. He was a retired employee from Tenneco in Milan, Ohio and was a member of the Trinity Lutheran Church in Willard.
He is survived by three children, Cindy (Lee) McClish of Ashland, Scott Osborn (Mari Andrus) of Fairfield, CT, and David (Robyn) Osborn of North Fairfield; five grandchildren, Holly (Tyler) Johnson of Columbus, Bethany (Joe) Prater of Orlando, FL, Brittany (Kyle) Rhodes of Ontario, Bryce McClish of Ashland, and Allie Stutler of Tiffin; a great grandchild, Aria Stutler; one brother, Rex (Dora) Osborn of Clovis, NM; and a sister, Connie (Mark) Heidelberg of Albuquerque, NM.
In addition to his parents he is preceded in death by his wife Marilyn I. (Clark) Osborn in 1999; and a sister, Sandra Hiltz.
Visitation will be held at the Secor Funeral Home in Willard, Ohio on Thursday, June 15, 2017 from 2:00-4:00 and 6:00-8:00 PM. The funeral service will be held at the Trinity Lutheran Church in Willard on Friday, June 16, 2017 at 11:00 AM with Reverend Janet Wittenmyer officiating. Burial will follow in Maple Grove Cemetery in New Haven, Ohio. Memorial contributions can be made to the Trinity Lutheran Church in Willard. Online condolences can be made at www.secorfuneralhomes.com

Just rest until we see you again in the resurrection that Martha showed faith in at John 11:23-24. Acts 24:15 gives us more faith. Miss you dear brother!

We dearly loved you ,we will always remember you laughing and loving life ! Thanks for being in our lives! We are praying for all of your family . God Bless !Pr

Go in Peace, Cousin, knowing you and your family are in our thoughts and prayers.

Rest in Peace Brother!
I am going to miss you!