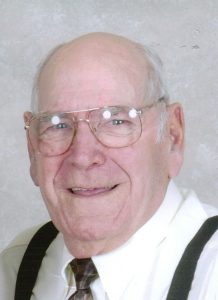 Kenneth Wilson, age 78, resident of Greenwich, Ohio passed away on Thursday, February 16, 2012 at his home surrounded by his family. He was born on January 6, 1934, in New Haven, Ohio to the late Harry and Florence (Miller) Wilson where he spent most of his growing up years. He was a loving husband, father, and grandfather. He enjoyed spending time with his family and grandchildren. He enjoyed doing crossword puzzles and building model airplanes.
He was in the National Guard Co. G from 1948 to 1952, serving at Camp Polk, LA.
He married Lois Garner on July 17, 1953.
He lived in Texas for approximately 15 years before returning to Ohio. He was a truck driver for many years, retiring from R&L Trucking in 1996. He also worked for security at MTD in Willard.
He was a past Exalted Ruler of the Willard Elks Lodge BPOE #1370 and the Brenham, TX Elks Lodge.
He is survived by his wife of 58 years and nine children, sons, Michael (Sharon), Mansfield; Richard (Joni), New Haven; Kenneth II, Texas; Daniel (Karen), Katy, TX; daughters, LoWayne “Jo” Rios, Galveston, TX; Lana Perry (Denny), Cambridge, OH; Carol “CJ” Bice (John), Killeen, TX; Deanna Gurka (Michael), Greenwich, OH; Roberta “Bobbi” Powers; many grandchildren and great-grandchildren, along with nieces and nephews.
Visitation will be held from 2:00 to 4:00 PM on Saturday, February 18, 2012 at the Secor Funeral Home in Willard, OH where the funeral service will be held immediately following the visitation, with Pastor Joe Green of North Fairfield Assembly of God Church officiating. Online condolences can be made at www.secorfuneralhomes.com

Deanna, sorry to read of the loss of your father. Please know that you and your family our in my thoughts and prayers during this difficult time.

My prayers to the whole family!

My prayers to the whole family!

God Bless you all now and always. My thoughts and prayers are with you. Kenny was a very kind and warm-hearted man who had no trouble showing his love to all (especially when he teased you). I have very fond memories I will always cherish. Hugs and Prayers – Love, Maureen

We are so sorry for your loss.. May you find peace in the days ahead….. with sincere condolances… Dennis & Jean