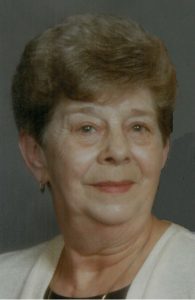 Lois J. Jester, age 85, resident of Willard, Ohio passed away on Friday, May 26, 2017 at the Mercy Willard Hospital. She was born on December 27, 1931 to the late Hiram and Margaret (Lehman) Mitts and had been a resident of Willard since 1953. Mrs. Jester had been employed at the former Holland Market and later, Moore’s IGA in Willard. She was a member of the Grace United Methodist Church in Willard, a volunteer at the former Central Elementary School, enjoyed trips to Arizona, and spending time with time with all her grandchildren.
She is survived by her husband, Lee A. Jester; four sons, Robert A. (Connie) Jester, Barry L. (Rhonda) Jester, William D. (Nancy) Jester, and Joel R. Jester all of Willard; a daughter-in-law, Sally Jester of Phoenix, AZ; ten grandchildren; eighteen great grandchildren; and several nieces and nephews.
In addition to her parents she is preceded in death by a son, Terry A. Jester; two sisters, Elaine Sheraw and Shirley Ainsley; and a brother, Harry D. Mitts.
A memorial service will be held at the Grace United Methodist Church in Willard, Ohio on Saturday, July 29, 2017 at 11:00 AM with Pastor Luigi Perez officiating. The family will receive friends from 10:00 AM to 11:00 AM at the church. Memorial contributions can be made to Grace United Methodist Pre-School or to Stein Hospice. Online condolences can be made at www.secorfuneralhomes.com

Hello Barry and family, I am so sorry to read about your mom. She was a great lady.