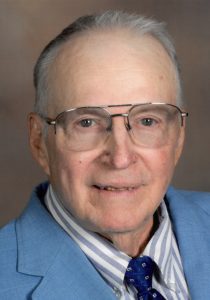 Lowell D. Kreager, age 77, resident of Greenwich, Ohio passed away on Tuesday, December 5, 2017 at the OSU Wexner Medical Center in Columbus, Ohio. He was born on June 28, 1940 in Newark, Ohio, the son of the late Frank and Eva (Claggett) Kreager and was raised on a Century Farm in Newark. Lowell attended the Ohio State University, where he earned a Bachelors in Education and a Masters in Ag Economics. He taught high school vocational agriculture and was a FFA advisor in Ohio at Scio High School and later retiring from South Central High School in Greenwich. Mr. Kreager had mentored several State Farmers in his programs and was very successful in FFA judging contests with his dairy and livestock cattle teams. In later years, he was employed by the Ohio Seed Improvement Association and by the Ohio Agriculture Statistics Service.
Lowell was a member of the Trinity Lutheran Church in Willard, Ohio. He was a current and longtime Firelands Electric Cooperative Board member, a member of the Huron County FARM Club, and was a former member of the Greenwich Grange.
He is survived by his three children, Janet (Bob) Kelley of Rock Hall, Maryland, Dean (Becky) Kreager of Newark, Ohio, and Ellen (Dan) Van Dussen of Boardman, Ohio; six grandchildren, Dara, Ben, Colton, Shyla, Aidan, and Maya; a sister, Iris Eppley of Zanesville; and numerous nieces, nephews and other relatives.
In addition to his parents, he is preceded in death by his wife, Beth M. (Oberhaus) Kreager on September 12, 2015.
Visitation will be held at the Secor Funeral Home in Willard, Ohio on Sunday, December 10, 2017 from 2:00 to 5:00 PM. Funeral services will be held on Monday, December 11, 2017 at 10:00 AM at the Trinity Lutheran Church in Willard with Pastor Janet Wittenmyer officiating. A graveside service will then be held on Monday at 3:00 PM at the Spring Grove Cemetery in Newark, Ohio. Memorial contributions can be made to the Spring Grove Cemetery Association for future preservation. Online condolences can be made at www.secorfuneralhomes.com

I would have to say that Vo Ag With Mr. Kreager was one of my favorite subjects at S.C. High school. I had him as a teacher for three years. I remember going to several judging contests, and every time we went, it was so enjoyable mostly because of Mr. Kreager. I learned a lot from him, as so many others did as well. We weren’t always the best behaved, but he never gave up on us. I will always remember Mr. Kreager with great fondness, and some of my favorite memories of SC were due to him.
May God bless you, dear family.

Janet, Dean,Ellen, So sorry to hear about your dad. I worked with him at Ohio Ag Stats. Even after he retired he would call just to chat especially after your mom passed. I really enjoyed working with him. You have my deepest sympathy. Laura Coleman, Mount Gilead.

I am so very sorry for your loss. Your family will be in my thoughts and prayers.

My condolences to the family. I graduated from South Central High School. Although I was not in the FFA program I remember Mr. Kreager fondly. He was such a kind hearted man. My sympathy goes out to you at this time of loss.

Remembering all the good times that were had with Lowell and Beth. Always felt he was one of the best brother-in-laws. My thoughts and prayers go out to his family.