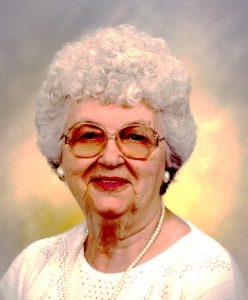 Mrs. Margaretta Carolina McKenzie, age 92, of Douglasville, Georgia, formerly of Plymouth, Ohio, passed away Sunday, February 21, 2016. She was born April 3, 1923 in New Haven, Ohio, the daughter of the late Mr. Charles S. Robinson and the late Mrs. Lottie Baker Robinson. She retired after 15 years of service as a civilian Supervisor for Wilken Air Depot, in Shelby, Ohio in 1956, at that time becoming a full time wife and mother. Margaretta was of the Baptist Faith. She was a member of the Eastern Star in Shelby, Ohio.
She worked tirelessly in her community, serving and volunteering in the Plymouth schools as Band Mothers President, The Plymouth Little League, and the local Cub and Boy Scout Troop. She was also a Foster Mother for over 30 years and babysat children in her home for three generations.
In addition to her parents, she was preceded in death by her husband, Perry Earl McKenzie Sr., whom she married on December 15, 1941; sister, Elvinia Wier; and brother, Harvey Robinson.
She is survived by three sons and daughters-in-law, Perry Earl McKenzie II and Pamela McKenzie of Douglasville, GA, Martin Leslie and Laura Sue Stutzman McKenzie of Plymouth, OH, and Michael Glenn and Amy McKenzie of Columbus, OH; a daughter and son-in-law, Patricia Ann “Patty” and Mark Clark of Greenwich, OH; twelve grandchildren; two great-grandchildren; several nieces and nephews.
Friends may call at the Secor Funeral Home in Plymouth, Ohio on Monday, February 29, 2016 from 12:00 to 2:00 P.M. with a funeral service at 2:00 P.M. at the funeral home with Minister Donnie Beverly of Plymouth officiating. Burial will follow in Greenlawn Cemetery in Plymouth, Ohio. In lieu of flowers, memorial contributions in memory of Margaretta C. McKenzie may be made to the Boy Scouts or Little League association of your choice. Online condolences may be shared to the family at www.secorfuneralhomes.com

Marty, Patty and Mike, I am very sorry to hear of your moms passing. I remember going over to your house with my grandma. She was a wonderful lady and I sure will be missed by all. Your family will be in my thoughts and prayers during this difficult time. God Bless

Sorry for your loss. I will miss stopping to see on our way south every december.