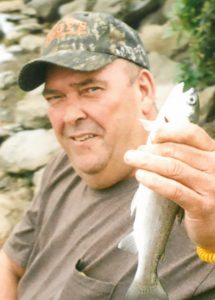 In Loving Memory of Marvin R. Risner, age 60, resident of Mansfield, Ohio and former Willard resident passed away on Sunday, September 11, 2016 at MedCentral Mansfield Hospital from a very hard fought battle with cancer. He was born in Willard, Ohio on March 10, 1956 to the late Vernon and Ethel (Ousley) Risner. He was employed as a collision specialist with Nagy’s Body and Frame in Ashland. Marvin enjoyed fishing, NASCAR, fireworks and family time. He will be remembered for his big heart and sense of humor.
He is survived by his wife, Laura (Ludwick) Risner, whom he married on August 25, 2001; four children, Dakota Wise of Mansfield, Catherine Wise of Mansfield, Ryan (Anita) Keene of Bucyrus, and Donna Milo of Galion; one grandson, Darian “Shorty” Milo of Galion; two great granddaughters, Kendall and Nadalie Milo; a sister, Marlene (Chris) Hale of Plymouth; a niece, Lisa (Mike) Back of Florida; four nephews, Michael (Suzy) Risner Jr. of Fremont, Matthew Stein of Shelby, Adam (Stacy) Hale of Port Clinton, and Dustin (Susanna) Hale of Willard; numerous great nieces and nephews; his father-in-law, Al Waltz of Florida; mother-in-law, Marcia Weber of New Mexico; four brothers and sisters-in-law, Mary (Mike) Ours and family of Florida, Brad (Karen) Ludwick and family of Arizona, John (Tamee) Ludwick and family of North Dakota, and Robert Ludwick of New York.
In addition to his parents, he was preceded in death by three brothers, Mike, Mark, and Larry Risner.
Visitation will be held at the Secor Funeral Home in Willard, Ohio on Thursday, September 15, 2016 from 3:00 to 6:00 PM where the funeral service will be held at 6:00 PM with Phil Beverly officiating. Online condolences can be made at www.secorfuneralhomes.com

Dakota & Family – My condolences for your loss.

Sending my heartfelt thoughts and prayers to my former classmates (1974) family and friends.

Marlene and family, sorry to hear of the loss of your brother… I know the sorrow of loss. I am struggling with a stroke for a year ,but I thank God for being able to walk with walker … May God be with you and the family of your brother.Gladys.