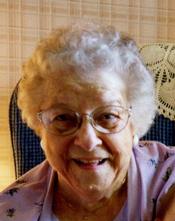 Mildred M. Oliver
September 7, 1915 – May 10, 2011
A memorial service for Mildred M. (Kieffer) Oliver, 95, of Newark, will be held Friday, May 13, 2011 at 10:00 a.m. at First Presbyterian Church, 110 W. Broadway, Granville with the Rev. Thom Lamb officiating. A graveside service will follow at 3:30 p.m. at Greenwood Cemetery in Willard, Ohio with the assistance of Secor Funeral Home.
Mrs. Oliver died May 10, 2011 at Licking Memorial Hospital in Newark. She was born Sept. 7, 1915, in Centerton, to the late Harry E. and Helen A. (Austin) Kieffer.
Mildred was a 1934 graduate of Willard High School. She retired in 1985 as a clerk for the Jump’s Ladies Store in Willard. Prior to moving to Granville in 1985, Mildred was a member of the First Methodist Church, Pettipoint Club, and Order of the Eastern Star in Willard. While living in Granville, she was a member of the First Presbyterian Church, TWIG 5, and Winter Picnic Club. Mildred previously worked part-time at the Tole House in Granville. An avid seamstress, her hobbies included sewing, crocheting, and other handwork.
Surviving are her daughters and sons-in-law, Sandra Jump of Newark and James Jump of Columbus, and Frances and Daniel Bellman of Granville; grandchildren and their spouses, Jonathan and Michelle Jump of Columbus, Benjamin and Brett Jump of Granville, and Molly Bellman of Granville; great-grandchildren, Olivia and Abigail Jump of Columbus, and Davidson and Isabella Jump of Granville; and several nieces and nephews.
In addition to her parents, she was preceded in death by her husband of 40 years, Jack S. Oliver, who died Feb. 16, 1981; grandson, Christopher Jump; two brothers, Robert and Dudley Kieffer.
The family will receive friends from 6 to 8 p.m. Thursday at McPeek-Hoekstra Funeral Home, 133 S. Prospect St., Granville. To ensure family receipt, please express all online condolences at www.mcpeekhoekstra.com.
Memorial contributions may be made to First Presbyterian Church, 110 W. Broadway, Granville, Ohio 43023.