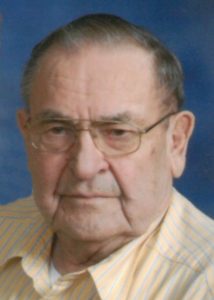 Richard E. Ehresman, 81, of Attica, OH, passed away on Monday, August 4, 2014 at his home. He was born on February 3, 1933 in Upper Sandusky, OH to the late Lee Vern and Dorothy (Perry) Ehresman. He married Marilyn (Martin) Ehresman on November 27, 1958 in Monroeville, OH. Richard graduated from New Washington High School in 1952. Upon graduation, he served his country in the Korean War from 1953-1954 and was in the reserves from 1954 until 1961. He was employed at Timken for 38 years before retiring of May 1990. Richard was a member of St. Bernard’s Catholic Church, as well as a life member of the American Legion and 3rd and 4th Degree of the Knights of Columbus.
He is survived by a daughter, Julie (Don) Broughton of Cincinnati, OH; a son, Richard “Rick” (Sharlyn) Ehresman of Attica, OH; four grand children, Aaron Broughton, Alexxys, Abbilyn and Austin “AJ” Ehresman. Also surviving are two sisters, Virginia Auck of Florida, and Fern Dentinger of Bloomville; two brothers R. Dale Ehresman of Norwalk and James Ehresman of New Washington.
Preceding him in death along with his parents are three sisters, Irene Stuckert, Jane Stewart and Annabelle Alkire as well as two brothers, John Ehresman and Lee Vern Ehresman.
Visitation is Friday, August 8, 2014 at St. Bernard Catholic Church in New Washington, Ohio from 11:00 AM to 1:00 PM followed by a funeral mass at 1:00 PM. Burial will be at St. Bernard Catholic Cemetery at a later date. In lieu of flowers memorials can be made to St. Bernard’s Catholic Church in New Washington or the Seneca East Public Library in Attica. Arrangements have been handled by the Secor Funeral Home in New Washington, OH. Online expressions of sympathy may be made by visiting www.secorfuneralhomes.com

Our thoughts and prayers go out to your family. We are sorry for your loss.

Our sincerest sympathies to Marilyn & family

My thoughts and prayers are with you!
Colleen