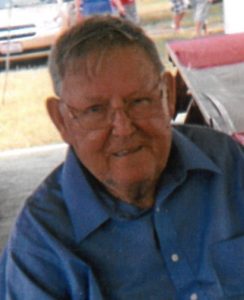 Richard Lee Hall, age 82, resident of Willard, Ohio passed away on Monday, December 18, 2017 at the Gaymont Nursing Home in Norwalk, Ohio. He was born on February 10, 1935 in Broad Bottom, KY to the late Elijah and Sally (Meade) Hall. He has been a member of the Guinea Corner Church of God since 1983. Richard retired from MTD in Willard in 2000 and enjoyed spending time with children and grandchildren.
He is survived by his wife, Zena (Tackett) Hall, whom he married on September 1, 1956; a daughter, Frances (Norman) Reed of New Haven; a son, Larry (Patricia) Hall of Odessa, Texas; one grandson, James Blankenship of Willard, Ohio; five step-grandchildren, Christine Brock of Odessa, Texas, and Clifford Brock of Odessa, TX, Chris Blankenship of Shiloh, Dorothy Swank of Tiro and Chad Blankenship of Plymouth; and numerous nieces and nephews.
In addition to his parents, he is preceded in death by five sisters, Dorthola Yates, Bertha Hunt, Lucy Clark, Onetia Johnson and Marilyn Bryant; three brothers, Eugene Hall, James Hall and Russell Hall; and a grandson, Richard Hall.
Visitation will be held at the Secor Funeral Home in Willard, Ohio on Wednesday, December 20, 2017 from 5:00 P.M. to 8:00 P.M. Funeral services will be on Thursday, December 21, 2017 at 1:00 P.M. at the Guinea Corner Church of God in Willard, Ohio with Pastor Dennis Shrader officiating. Burial will follow at the Greenlawn Cemetery in Greenwich, Ohio. Online condolences can be made to the family at www.secorfuneralhomes.com

Remain Anonymous - Aug 14, 2019
I pray he asked for forgiveness for all the children he sexually abused before he died. God may have forgiven him, but I will never forgive him or the other evil men like him.