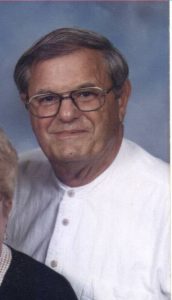 Richard C. ‘Rink’ Rettig, age 82, resident of Willard, Ohio passed away unexpectedly on July 5, 2007 in Houston, Texas. He was born on November 20, 1924 in Galion, Ohio to the late Jessie and Ethel (Sayles) Rettig and had been a Willard resident most of his life. He was a 1943 graduate of Willard High School and then served in the US Navy during WWII. Mr Rettig was employed with the B & O Railroad for 43 years and retired as a Machinist Foreman. He is a member of the Willard American Legion, the Willard Moose Club, the Norwalk V.F.W, Willard Masonic Lodge and the Plymouth United Methodist Church. He enjoyed hunting and spending time at their place at Kelley’s Island.
He is survived by his wife, Elizabeth ‘Betty’ (Stillions) Rettig who he married on Jan. 6, 1996; three daughters, Patricia Rettig of Willard; Rebecca & Randy Johnson of New London; Barbara Rettig of Plymouth; one son, Robert & Ruth Rettig of Willard; six grandchildren and 2 great grandchildren; three step-sons and spouses, Kenny and Sherry Jones of Des Moines, Iowa; Richard and Ann Jones of Denver, CO; Christopher and Debbie Jones of Cleveland; 3 step-daughter and spouse, Kathy and Rick Hoffman of Houston, TX , Jackie & John Wiles and Connie & Bob Brown of Willard; several step grandchildren.
In addition to his parents he is preceded in death by his first wife, Clarice (Pacey) Rettig; and second wife, Gloria (King) Rettig.
Friends may call at the Secor Funeral Home on Thursday, July 12, 2007 from 2-4 and 6-8 P.M.. Funeral services will be held at the funeral home on Friday at 11:00 AM with Deacon Paul Jones officiating. Burial will follow in Fairview Cemetery in Galion, Ohio. Memorial expressions can be made to the Historical Society of Kelley’s Island or to the Disabled Veterans. Online condolences can be made at www.secorfuneralhome.com