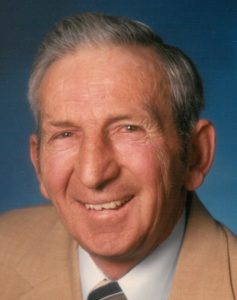 Thomas A. Nuhfer, age 90, passed away Thursday, June 29, 2017 at The Willows in Willard. He was born on February 11, 1927 in Fremont, Ohio to the late Clarence and Emma (Avers) Nuhfer and had been a Willard resident since 1963. Mr. Nuhfer was a graduate of Woodville High School and was a life long dairy farmer. He was a member of the Ohio Jersey Breeders Association and the American Jersey Cattle Association, serving as co-chariman of their National Convention in Ohio in 1983. He also served on the Huron County Fair Board and was a 4-H Club Advisor for over 50 years. He dedicated his life to raising cattle and mentoring young people. His positive attitude served him well for 90 years.
His life memories are carried on by, Gary (Amy) Nuhfer of Willard; three daughters, Rebecca (Lee) Ortman of West Liberty, OH; Barb (Jack) Hunter of Cincinnati, OH and Bobbi Fries (Dave Featheringill) of Willard; ten grandchildren, Kristin (George) Galloway; Lindsay (Mike) James; Annie (Adam) Hall; Brandon (Kristin) Hunter; Ross (Nikki) Hunter; Jason (Brandy) Nuhfer; Colby (Jessica) Nuhfer; Brock (Tiffany) Nuhfer; Ben Fries (Katie Didelot); and Sarah (Jason) Warner; 13 great grandchildren; two sisters, Helen Diekman of Fremont; OH; and Kathryn Humburg of Fremont, OH; one sister-in-law, Lucille Nuhfer of Pemberville.
In addition to his parents he is preceded in death by his wife, Eunice Nuhfer in 2008; a daughter, Sandra Nuhfer; a son-in-law, Steve Fries; and four brothers, Richard, Charles, Arthur and James Nuhfer.
Visitation will be Wednesday, July 5, 2017 from 6:00 – 8:00 PM at Secor Funeral Home in Willard, Ohio and on Thursday, July 6 from 10:00 – 11:00 AM at the First United Methodist Church in Willard, Ohio. The funeral service will be on Thurday, July 6, 2017 at 11:00 AM at the First United Methodist Church with Rev. Darlene Robinson and Rev. Lee Ortman. Burial will follow at the Gibsonburg Union Cemetery in Gibsonburg, Ohio. Memorial contributions may be made to the International Heifer Project (www.heifer.org) or the Huron County Fair. Online condolences may be made to the family at www.secorfuneralhomes.com

Dear Nuhfer Family,
I was sorry to hear of Tom’s passing. May God give you peace.

We are sorry to hear of your dad’s passing. We will fondly remember his ready smile and kindness. Sending prayers for peace in your hearts.

So SORRY to hear this bad news !!! My deepest sympathy to the Nuhfer family ! Prayers

So SORRY to hear this bad news !! My deepest sympathy to the Nuhfer family ! Prayers

Please accept our deepest sympathy for your loss. May you find comfort in God and find continuing strength and peace in the days ahead. 2 Corinthians 1:3,4

So sorry to hear about Tom. He was a good neighbor. Prayers for the family.

Was so sad to hear about Tom. We always enjoyed speaking to Tom at the Willows when we visited our brother Bob. I am sure he will be missed. Our sympathy to the family.

prayer to the famly
from raders old fashion ice cream

I love you Uncle Tom. You are greatly missed. Love Barb Sampsel

Sorry to hear about your Dad and Grandpa. Miss y’all love kay

Sorry to hear about your Dad and Grandpa. Miss y’all love kay