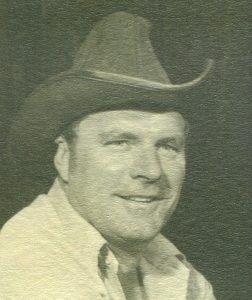 Thurman Recil “Curly” Lewis, age 85, resident at Crestwood Care of Shelby died Wednesday morning, August 3, 2016 following a long illness. He was born on February 2, 1931 in Morgan County, KY and the oldest son of Laura and Cletus Lewis. Thurman served in the army 2 years and reserves six years. He was proud of his army service and of his rank of Sergeant 1st class. He worked at the Wilkes Air Force Depot in Shelby as a foreman until it phased out. He started his career with cattle at age 13 by buying his first calf. His knowledge and abilities in the cattle industry were unsurpassed. He had spent the last 30 years around Mayslick, KY attending the Mayslick Assembly of God church when he was able. The last 12 years he worked for Jim Rogers of Mansfield managing his cattle operation in Kentucky.
Thurman is survived by three brothers Freeman Lewis and Wendell (Alice) Lewis of West Liberty, KY; and Donald (Becky) Lewis of Shelby; one sister Wilma (Del) Phelps of Middleburg Heights; one daughter, Linda (Jeff) Adams of Willard; one son, Lynn Lewis of Ontario; two granddaughters, Tiffany Ogg of Fremont and Tina (Jeremy) Kaufman of Mansfield; one grandson, Grant Lewis of Ontario; seven great grandchildren; 2 aunts, Ruth Adkins and Betty Nothacker; one uncle, Burnell (Mary) Lewis and many special caregivers at Crestwood Care.
He is preceded in death by his parents, Cletus and Laura Lewis, one brother Sylvan Lewis, one sister, Naomi Kahrl and one infant son.
Visitation will be held at the Willard Church of God on Friday, August 5, 2016 from 5:00 to 8:00 PM where the funeral service will be held on Saturday, August 6, 2016 at 10:00 AM with Pastor Greg Griffith officiating. Burial will follow in Mt. Hope Cemetery in Shiloh, Ohio. In Lieu of flowers, memorial contributions may be made to Secor Funeral Home. Online condolences can be made at www.secorfuneralhomes.com

Linda,
I am so sorry to hear of your Dad’s passing. What a long full life he had. Hoping God’s grace will help you through this time.
Prayers to you and the girls.
Becky