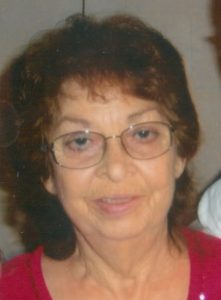 Virginia “Jennie” Allen, age 77, resident of Amherst, Ohio and formerly of Willard, Ohio passed away Sunday, September 27, 2015 at the Avon Place following a lengthy illness. She was born January 28, 1938 in Garrett, Kentucky to the late John D. and Eva (Whitaker) Collins. Virginia had been a resident of Ohio most of her life. She enjoyed crocheting, garage sales, flea markets, and her fresh grown tomatoes.
She is survived by her sister, Martha Howard of Amherst, OH; two nephews, John (Julie) Howard of Wakeman, OH, Robert (Angela) Howard of South Amherst, OH; mother-in-law, Iwilda Allen of Willard; step-son, Charles Allen of Upper Sandusky; three sisters-in-law, Barb Jones, Lorraine (Ronnie) Lykins, and Kathy (Jim) Mauer all of Willard; two brothers-in-law, Leonard (Linda) Allen of New Haven, and Dallas (Ruth) Allen of Willard; four grandchildren; many nieces, nephews and great nieces and nephews.
In addition to her parents, she is preceded in death by her husband, Charles R. Allen, who died September 26, 2012; four brothers, Bill, Miles Jr., John D. Jr. and Samuel Collins; and a sister, Pauline Kilgore.
Visitation will be held on Wednesday, September 30, 2015 from 4:00 to 7:00 PM at the Secor Funeral Home in Willard, Ohio where the funeral service will be on Thursday at 11:00 AM with Pastor Greg Griffith officiating. Burial will follow at the Maple Grove Cemetery in New Haven, Ohio. Online condolences may be made to the family at www.secorfuneralhomes.com

Iwilda, Kathy and Family, Our thoughts and prayers are with you during this time of your loss. In God’s Love,

Martha, my heart is broken. Jennie was like my sister growing up at Grandpa Bill’s house was one of my fondest memories of childhood. The Collins family each and everyone has a special place in my heart, but Pauline, Martha, Jennie, and Sam where like my big brother and sisters. My mom thought there was no one like each and everyone.
My prayers are with you Martha. I’m try to figure a way to make it to the funeral. I have a Doctor’s appointment Wednesday and physical therapy Thursday on my right arm. If I can’t make know my prayers are with you. I love you so much.
Love and prayers,
Billie O’Quinn